GunShyAssassin.com has posted an exclusive stream of Power Theory‘s “Colossus,” from the band’s recently released An Axe to Grind. Praised by critics for their energetic brand of traditional metal and stellar musicianship, Power Theory brings a modern edge to the classic NWOBHM style. Check out “Colossus” at this location.

In other Power Theory news, the band recently welcomed guitarist Steve Stegg [Blood Feast, Sleepy Hollow, Tapping the Vein] into the fold. “Power Theory has been looking to add a second dual rhythm/lead guitarist since the end of the recording sessions for An Axe to Grind, but our commitments haven’t given us the time to do anything but start to compile a list of potential candidates,” guitarist Bob “BB” Ballinger explained.

“Steve is a great friend and supporter of the band, and has been a regular at our local shows; in fact he replaced me as the Colossus guitarist and played with Jay Pekala prior to his first Sleepy Hollow tenure. We would always jokingly added Steve as our top candidate when we discussed it, but knew he was very busy with Sleepy Hollow and there was no chance, so we moved on to other names” added BB. “Steve informed us he had become available in mid July and was interested in jamming to see if there was chemistry and it was evident from the first few minutes itwas a great fit for both Power Theory and Steve.”

Power Theory has started work on the follow up to An Axe to Grind. The band will enter the studio in February to begin the recording process. Stay tuned for more details. 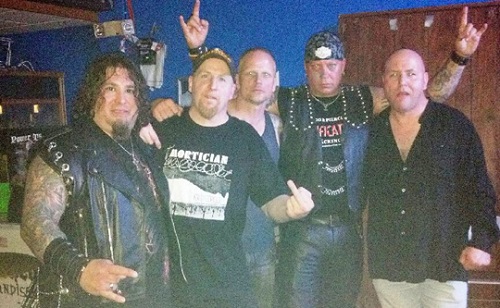