GunShyAssassin.com has posted an exclusive world premier of the song “Judgements And Curses” off of Behold Almighty Doctrine, the forthcoming third full-length from South Carolina USDM War Machine LECHEROUS NOCTURNE.

Check out the tune at this location and then brace yourselves for the March 19th release (via Unique Leader Records) of Behold Almighty Doctrine.

The long awaited follow up to 2008’s The Age of Miracles has Passed raises the band’s already considerable game yet again. The band’s technically accomplished musicianship and skillfully concise songwriting fuse without seam to make what will surely be considered one of the year’s most lethal displays of U.S. Death Metal firepower. Ethan Lane and founding member Kreishloff are responsible for six-string sorcery; James O’Neal (Apotheosys, Atrocious Abnormality) and Alex Lancia (Annthennath) low-end tremors and rhythmic battery, respectively; and Chris Lollis (ex-Nile) hell-spawned roars of the possessed. The short of it? Faces will melt. 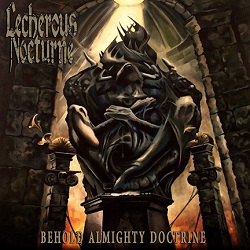