Next week will see New Jersey thrash n’ rollers HAMMER FIGHT release their full-length debut, Chug of War, and strike out on the 10-date “Chug of Tour Vol. II” trek in support of said album. The folks at GunShyAssassin.com have been gracious enough to give the band a slice of their cyberspace for a multi-part tour blog that will chronicle the coming debauchery. And to get the weekend off to a properly raucous start, GSA has posted the exclusive world premiere of album track “Ruben’s Ride.” To check out the tune, grab a brew, crank it up to 11 and visit gunshyassassin.com/exclusive/hammer-fight-exclusive-song-stream-rubens-ride.

While the tune blasts in the background, be sure to read Episode One of the HAMMER FIGHT tour diary, written by bassist/vocalist Drew Murphy. The blog entry is posted at this location.

The DC in the City-directed music video for “I Didn’t Feel Like Drinking (Until I Started Drinking),” also from Chug of War, is now playing at the link below: http://www.youtube.com/watch?v=DeG_Pxp15jk

Chug of War, which follows the band’s 2011 untitled EP, was recorded by Bobby Torres at The Machine Shop in Belleville, NJ. Artwork for the album came from a collaboration between Hammer Fight bassist/vocalist Drew Murphy and Buz Hasson, tattoo artist and co-creator of the comic book The Living Corpse. Chug of War is set for release on November 12 via Horror Gore Pain Death Productions.

Chug of War will be limited to only 500 copies. Pre-orders for the CD and a CD + t-shirt bundle are available from the band’s web store at hammerfight.bigcartel.com. 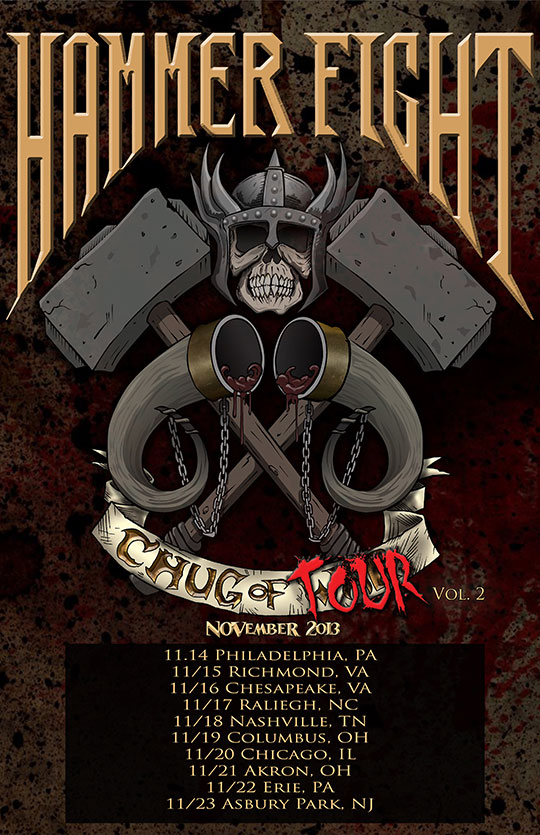