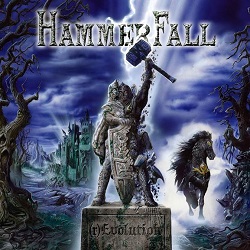 After taking a creative break last year, Swedish Heavy Metal pioneers HAMMERFALL are fully recharged and back with a vengeance. Entering a new chapter of the HAMMERFALL success story, »(r)Evolution« will be out onAugust 29 (Sweden: 27.08., UK: 01.09., USA: 02.09.) via Nuclear Blast.

With »(r)Evolution« the band takes things back to the roots in many ways, as they once again worked with producerFredrik Nordström, who helmed their two milestone releases »Glory To The Brave« and »Legacy Of Kings«during the band’s early years and thus has taken a major part in the development of HAMMERFALL. The music was recorded in guitarist Oscar Dronjak’s Castle Black Studios in March and April. Then singer Joacim Cans went to the United States for vocal recordings, once again working with James Michael (the SCORPIONS, MÖTLEY CRÜE etc.), who also did a great job on the predecessor »Infected«. The album was mixed and mastered byFredrik Nordström and Henrik Udd in Studio Fredman.

Another reunion of sorts takes place with cover artist Andreas Marschall, the “father” of HAMMERFALL’s mascotHector, who has been with the band since the very first album and is once again included on the front cover of »(r)Evolution«. The beautiful artwork features all the traits that made the Andreas Marschall HAMMERFALLcovers so beautiful and special.

On July 18, 2014 the hymn-like ‘Bushido’will be released as the first single track – digitally as well as on vinyl. The song sums up the band and its history perfectly, as in Japanese bushido means “the way of the warrior”. 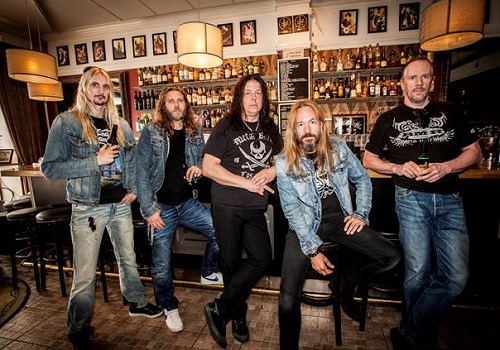 Last Saturday, countless international journalists, TV stations and local press, got together in the bands hometown Göteborg for the album’s baptism. Isabelle Le Maguet of French Metallian Magazine commented: “With (r)Evolution, HammerFall are back to their roots but show they can offer varied songs at the same time. Full of metal hymns, catchy tunes/choruses, nice choirs, interesting/dynamic rhythm variations, good soli and melodic vocal lines, this new album will definitely please the fans”

Jürgen Will from German Rock It magazine even predicts the CD to have „the potential to become a classic“.

The track listing of »(r)Evolution« will be like this:

Hot News: Hammerfall – The Templars return in force in 2014!