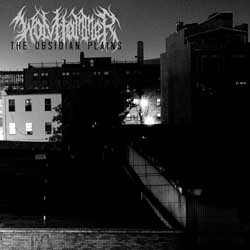 “I’ve spilled enough digital ink griping about modern metal’s overabundance of sterility and dearth of originality to fill a book in 2011, which makes it all the more satisfying when a fist in the face like WOLVHAMMER’s “The Obsidian Plains” comes along. Actually “a fist in the face” might be an understatement, because this Minnesota wrecking crew isn’t just delivering a knockout blow to candyass modern metal with their sophomore album, they’re slaughtering it with a flurry of filthy, blackened riffage and punishing rhythmic ferocity.

You see, WOLVHAMMER sound like a bunch of gnarly blue collar motherfuckers decided to form a band that would kick the living shit out of every lame current heavy metal trend you could name (don’t get me started) while in the midst of a whiskey, weed, Hellhammer and Eyehategod-fueled bender. Positively shit-faced and high as hell, yet coiled and ready to wreak unspeakable violence at any given moment.

That’s what sets WOLVHAMMER apart from the pack. Violence. Danger. These things are palpable throughout “The Obsidian Plains”‘ whirlwind of reckless abandon as the band goes on a musical trawl through the gutters of humanity looking for fresh meat. Even when WOLVHAMMER puts on the breaks and slips into a doom-laden trudge or a bout of eerie, blackened psychedelia, the album oozes real malevolence and hatred. It’s in the feedback and noise that creeps up from time to time, threatening to spiral out of control. It’s in the unhinged yet pummeling performances that make it feel like any one of the members of WOLVHAMMER could fly off the handle, crawl out of the speakers and smash your skull to a pulp without thinking twice about it. It’s in the driving intensity of the band wrestling with their instruments to keep the album from becoming total chaos.

And yet there is a method to the quartet’s madness. WOLVHAMMER know a thing or two about compelling songwriting, whether dishing out neck-snapping grooves or hypnotic tremolo riffs. Craftsmanship abounds, and the band is highly adept at throwing black metal, sludge and crust into a blender, chugging it, and then spewing the nasty concoction all over the unsuspecting listener. This mastery of a multitude of styles, combined with a brash energy that’s clearly indebted to real rock ‘n’ roll (and very possibly Motorhead), makes “The Obsidian Plains” one hell of a compelling listen.

In a time when metal has become painfully safe, WOLVHAMMER brings the fucking anarchy on “The Obsidian Plains”. It’s an ugly, twisted, rat bastard of an album that would just as soon stab your eyes out and piss in the bloody sockets as look at you. If you’re as tired as I am of squeaky clean productions, bands ripping off Mercyful Fate, bands welding generic Swedish death metal onto faceless American hardcore, namby pamby occult rock, etc, WOLVHAMMER’s got the cure for what ails ya. Viva hate.”