In cooperation with Finnish kaaoszine you can now stream the entire HANGING GARDEN Lifeforce Records debut album ‘At Every Door‘ under the FOLLOWING LINK. 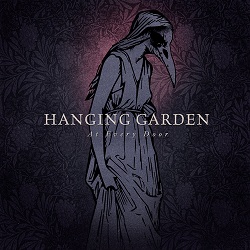 HANGING GARDEN “At Every Door”
is set to be released on
January 28th in Europe and on February 5th in North America.

Dark, melancholic and spiced up with some well-dosed heaviness “At Every Door” is the perfect soundtrack for dark winter days!

Imagine a mix of bands like Cult Of Luna, Sisters Of Mercy, Daylight Dies, Ghost Brigade and The Cure.

HANGING GARDEN aren’t new to the Scandinavian atmospheric and heavy music scene. Being around since 2004 and having released two albums for Spikefarm Records – “Inherit The Eden” (2004) and “Teotwawki” (2009) – the Finnish group already introduced their view on depressive and emotional disturbing music that is based on the dualism of beauty and harshness. With “At Every Door” the sextet discovers an even more accentuated and distinctive mix of different genres including doom influences, melodic death, post metal and post rock as well as acoustic and folk quotations.

The third album marks a new start for HANGING GARDEN, because “At Every Door” is the first output with new singer Toni Toivonen, drummer Antti Ruokola and Jussi Kirves on bass guitar. And of course it is bands first record for LIFEFORCE RECORDS. The Finns do not follow trends and defy conventions. “At Every Door” is an apocalyptic view on the world dominated by humans and a balefully future. Even without noticeable velocity HANGING GARDEN create lasting impressive contrasts that affect their listeners in the innermost. There are hints of optimism, but overall listeners will undergo depressive and less confident music in between Cult of Luna and Sigur Ros.

Hot News: Hanging Garden “Will You Share This Ending With Me” video released

Hot News: Hanging Garden “I Was A Soldier” EP teaser