Welsh heavy rockers HARK have kicked off their Europan tour with a fantastic show at the prestigous Roadburn Festival last Saturday. This was the starting signal for an extended ride on the rocky roads of the old continent. The power-trio have joined A STORM OF LIGHT, while MUSTARD GAS & ROSES are firing up at the opening slot. HARK will continue to make you sweat until their final show at the Temples Festival in Bristol on the 4th of May 14.

HARK are touring in support of their debut album “Crystalline”, which is available for order at the Season of Mist e-shop. 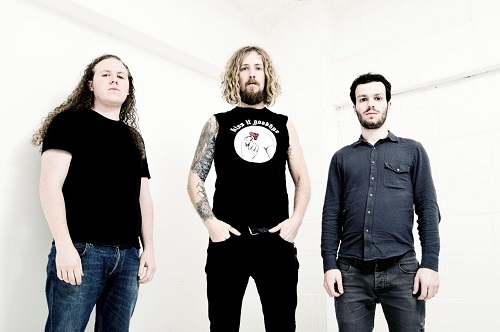 The artwork for “Crystalline” was designed by HARK guitarist/vocalist Jimbob Isaac, himself an acclaimed graphic artist who has worked with the likes of RED FANG, CLUTCH, MELVINS, KVELERTAK and more.

“With ‘Crystalline’ we hope that you can hear a new band with an old soul”, comments mastermind Jimbob Isaac. “Nothing worthwhile is ever easy, and we hope the ‘do or die’ ethos behind this band and record connects with people on all levels. To pursue art and music, is to expand our consciousness, is to purge and is our two fingers up to those who say we can’t. Awaken, all ye algorithmic soul seekers, crystalline realization awaits you.”

The phoenix of classical myth was considered to be a creature of great beauty. Bursting into flames at the end of its life cycle, the bird would be reborn out of the ashes of its predecessor.HARK share a similar fate as the trio is spawned from the remnants of celebrated British heavy rockers TAINT. The creative hand of frontman Jimbob Isaac can be clearly felt throughoutHARK‘s fantastic debut album “Crystalline”. Angular riffing, pounding rhythms, and dually melodic and his unrelentingly ferocious vocals lead to galloping passages that show the maturity of a band far more honed than expected from a debut. The Welsh did not leave any detail to chance, but carefully crafted music, lyrics and visuals into an all encompassing concept. This diligence includes having their first full-length mixed by Kurt Ballou of CONVERGE fame (KVELERTAK, TORCHE, ISIS), who added a powerful yet crystal clear production to HARK‘s unique sound. The artwork was personally designed and drawn by Jimbob Isaac, who is not just known as an outstanding musician but also working as an acclaimed graphic artist. “Crystalline” furthermore features guest vocals from Neil Fallon (CLUTCH) on the stunning track “Clear Light of….”. HARK will literally rock the world with this release. Crank your volume up high and get blown away!