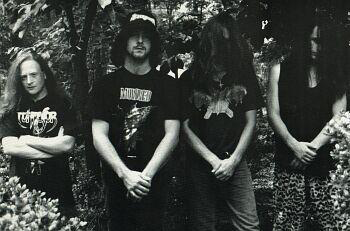 Heaven and Hell Records will be releasing the complete recorded works from North Carolina death thrashers FALSE PROPHET on CD as part of the Lost Relics collection.

Formed in the late 1980’s FALSE PROPHET would quickly become one of North Carolina’s leading metal bands and grew into one of the East Coast’s most fierce thrash/death metal acts by the early 1990s. Their first self-titled demo, released in 1989, saw the band gain attention throughout the underground. But it wasn’t until the release of their full-length, Second Death, in 1991 that the band began to gain mass critical praise from critics and peers. Many throughout the metal community saw FALSE PROPHET as the next Morbid Angel.

The band toured the region playing with such acts as Danzig, Confessor, Forbidden, Demolition Hammer and Dark Angel. They eventually landed a deal with Belgium label Mausoleum Records. Unfortunately an album would never be release. By 1993 the band changed their name to INFERNAL HIERARCHY and released a self-titled, two-song 7″. The band split up shortly there after.

Finally this awesome thrash/death metal collection will see a proper release all re-mastered by Jamie King at The Basement Studios in Winston-Salem, NC.

Video footage of the band playing live at Snookers in Raleigh, NC in 1993 has been posted at: www.youtube.com/watch?v=pcmF70CDvR0&feature=youtu.be