There is a pleasure in the pathless woods,
There is a rapture on the lonely shore,
There is society where none intrudes,
By the deep Sea, and music in its roar: I love not Man the less, but Nature more.

Northwestern stronghold of magick ‘n’ mysticism PESANTA URFOLK announces May 15th as the international release date for HELL‘s Trilogy boxset. This four-LP picture-disc boxset will receive the characteristically grandiose treatment from PESANTA URFOLK, the labor of love of noted photographer/documentarian/musician/Stella Natura festival organizer Adam Collins-Torruella. Committed to honest, intense art in all its forms – and, dutifully and reverentially, manifesting it physically in a manner most perfect and poignant – PESANTA URFOLK spans the wide spectrum of true “outsider music,” from autumnal neofolk and haunted Americana to spectral black metal and elegiac doom-drone, and many points in between. To date, the label has released luxurious vinyl artifacts from the likes of ASH BORER, VELNIAS, LUX INTERNNA, MERKSTAVE, SUTEKH HEXEN, LASHER KEEN, SANGRE DE MUERDAGO, L’ACEPHALE, WREATHES, HAIL (USA), KINIT HER, and MUNLY AND THE LEE LEWIS HARLOTS among others. HELL‘s Trilogy is next in line of a slew of new, bewitching releases slated for this year from PESANTA URFOLK, following on from the previously announced release of NOCTOOA’s Adaptation, also set for May 15th. 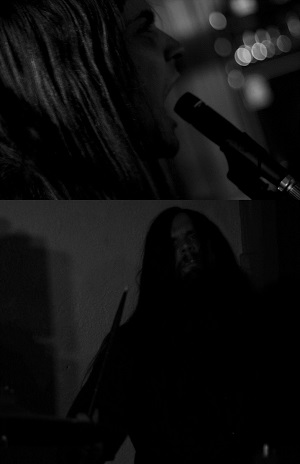 Is hell a metaphorical place, or a literal one? Where is HELL? HELL currently resides in Salem, Oregon, USA. It is largely the work of one M.S.W. To date, the man has recorded three increasingly expansive full-length albums, always on cassette format, and always selling out almost immediately. Now, after the highly successful vinyl pressings of I, II, andIII, all courtesy of PESANTA URFOLK, HELL prepares to make that metaphorical place a literal one (or is that vice versa?) with an exclusive, luxurious picture-disc boxset containing all three HELL treatises to date, appropriately titled Trilogy. Across four picture-disc vinyl LPs and seven sides of music, the entirety of HELL shall be laid before you: both light and shade, weight and weightlessness, space and smother, from elegiac drone to feral black metal, viscous sludge to autumnal Americana, there and back again, sonic wanderlust riding the deluge, HELL unshackles itself and places the dense ‘n’ demanding burden squarely upon the listener. So, back to the original question: is hell a metaphorical place, or a literal one? Open up Trilogy and find out for yourself.

Embossed box, including a 12″ x 24″ insert and 24″ x 36″ poster: http://pesanta.bigcartel.com/product/hell-trilogy-picture-disc-box