The Sleaze Metal Band Helldorados from Stuttgart Germany sign a worldwide record contract with Massacre Records / Soulfood, after their last year promotional EP has received very positive reviews all over Germany. The full length album was now produced in the legendary Horus Sound Studios in Hannover (Scorpions, Helloween, Kreator, Victory, Guano Apes) and will be released Friday, 13th of July.

Just in February, 2011 Helldorados recorded a 4-song strong promotional EP in the legendary Horus Sound Studios in Hannover under the direction of producer Mirko Hofmann. As “a godfather” acted Horus founder Frank Bornemann. From the beginning the ELOY Frontman was enthusiastically from the sound, the independence and the logical approach of the Stuttgart quartet. Helldorados now line up themeselves in the list of Bands which recorded some of their most important albums there: Scorpions, Kreator, Helloween, Victory, Guano Apes to call only some. 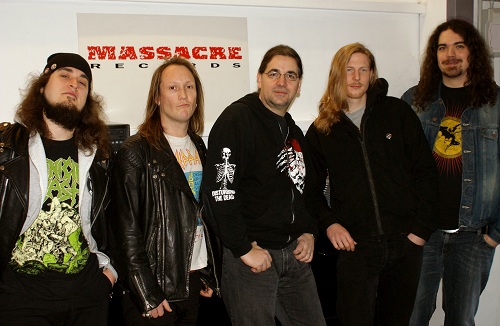 “Good self- and time management does not exclude creativity. We have worked the last 24 months every day very hard for this next logical step,“ Pierre (vocals), Steve (guitars), Gunnar (bass) and Chris (drums) are telling. The times as a newcomer got enormous sums of financial advance, are over definitively. Nowadays it is natural to have a prominent basic product to win other partners, Pierre is sure. With the Massacre Records contract a new chapter is whipped in the Band history. „We are very glad about the cooperation with a so high motivated and typically impressive Band like Helldorados“, according to A&R manager Thomas Hertler.

Less Sex, Drugs and Roll `N Roll rather Blood, Sweat and Tears Helldorados had to experience since the beginning days in 2007. First the Band won a contest price for „best stage performance“ and one year later they sold 500 copies of their first self-distributed album “Just Rock”. More than 100 shows followed in Germany, Switzerland and Austria (supporting Bands like Bullet, Enforcer, Rhino Bucket or Bloodlights) as well as gala show appearances, e.g., at the historical Bregenzer sea stage during the european soccer cup 2008. In addition the first partnerships begun with local brewery Dinkelacker-Schwaben Bräu, the English photographer icon Duncan Smith and from 2011 with the Wacken foundation well-known by the world biggest Heavy Metal festival. Instrument endorsements with Steve Clayton USA, Pyramid strings Germany or Dr. No Effects Netherlands could also be won. Besides, a global Merchandise licence deal was concluded with the German Art Worx Merchandising AG.

The high-quality production and the dynamic Songwriting of the promotional EP given Helldorados the first media attention in all relevant online Fanzines as well as article in the appropriate magazines. RockHard Vol.296 “… at the latest the Stuttgart quartet presents itself with the ballad Changes and the final song Shout Out as an absolutely serious candidate on the national rock throne” or Metal Hammer April, 2012 “… this four tracks are worth every second… the EP is convincing with mature songs plus big melodies… Dear A&Rs of the nation – Sign Now!” At the same time various radio stations played the songs without an entire Helldorados album out at the market. „We see ourselves furthermore as a Rock `N Roll Band in the niche and, therefore, are glad about the wide attention. Everything more is Add-On anyway,“ says Helldorados guitarist Steve.

Helldorados are musical somewhere between the hit potential of a catchy ABBA tune, the sleaze of Guns `N Roses and the striking force of Pantera. A strange mixture but it seems to function.