SATURNAL RECORDS sets May 26th as the international release date for HELLSPIRIT‘s highly anticipated debut album, Dawn Under Curse. HELLSPIRIT was formed in 2004 in Kuopio, Finland by Dethrone and Goat. The band released two demos during the years 2005-2006 and recorded a split release with Australian blackthrashers Nocturnal Graves in 2007, but it was not released until 2010, by Nuclear War Now! Productions, due to numerous difficulties on the way.   HELLSPIRIT‘s lineup altered very drastically during the first years of the band’s existence. A stabile lineup was established in 2011 when Dethrone and Heinrich Von Heretic, who had already joined the ranks of bassist in 2008, teamed up with Eld on drums and MSA on guitars. The band then started working on a debut full-length with a whole new intensity together with raging live shows, where they shared a stage with such bands as Anal Cunt, Nifelheim, and Sabbat.   The musical style of HELLSPIRIT had changed during the years from very straightforward thrash-oriented black metal towards more epic and war-like black metal where influences of thrash and heavy have taken a step up to a whole other level.

Finally, in 2012, HELLSPIRIT started recording their debut full-length album, which led to a deal with Finnish underground record label No Sign Of Life, which eventually ceased all activities before the debut was released. The band was perhaps one of the most prominent ones in Finland’s underground scene at the time, and yet an unsigned artist.   At the threshold of the band’s 10-year anniversary in 2014, HELLSPIRIT signed to SATURNAL RECORDS, and finally, the band’s long-anticipated debut album, Dawn Under Curse, is seeing daylight this year. HELLSPIRIT delivers raw and epic black metal with solid roots in thrash and heavy metal. The band’s musical style has been evolving through their 10-year existence, from the point where one can find resemblances to classic Finnish and Australian black thrash acts to more epic soundscapes influenced by classic names like Bathory and Morrigan. 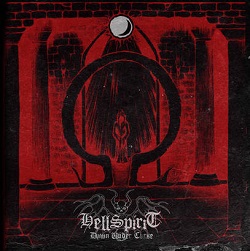 “Weak Flesh – Filthy Blood,” the first sample from HELLSPIRIT‘s Dawn Under Curse, can be heard HERE while a special promotional video for the track can be viewed HERE.