Rock Island, Illinois’ HELMSPLITTER have made their Horror Pain Gore Death Productions debut with the ferocious beast known as Enraptured By Suffering.

HELMSPLITTER are a Molotov cocktail of Black Metal, Sludge, Death Metal, Crust Punk, Thrash, Doom Metal and hateful Blues. This is extreme metal that takes you on a musical roller coaster through a world of misanthropy, pain, frustration and despair. Unpredictable, relentless and absurdly heavy, HELMSPLITTER manage to blend various styles together in a seamless, naturally flowing and unforced manner that is uncanny. Recorded, mixed and mastered by Scott Creekmore (BROKEN HOPE, NUM SKULL, LUPARA) and features Blakk (ANGELKILL, MORTUARY OATH, MASKIM) on vocals. Enraptured By Suffering is recommended fans of MORBID ANGEL ANGELCORPSE, GRAVE, DARKTHRONE, MALEVOLENT CREATION, EYEHATEGOD, GOATWHORE, GORGOROTH, and MARDUK, among others.

Enraptured by Suffering is available on digital and CD formats at the following links: 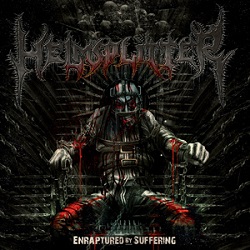 1. Tyrants for Blood
2. Panzram
3. Aura of Suicide
4. Burden of Our Existence
5. Dance of The Heretic
6. World So Wicked
7. Portrait of Scars
8. The Ground Bleeds Sorrow
9. Forged In Fire
10. Days of Loathing
11. Summon The Leeches 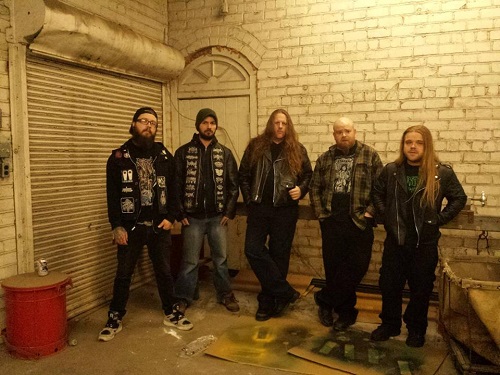 HELMSPLITTER was born in the summer of 2008 when guitarist Ross Mallie and drummer Nate Boyd joined forces. After filling out the rest of the lineup the band spent the next few years playing shows around the Midwestern region of the United States as well as recording a demo. Around this time it became apparent that the band would have to part ways with their original singer and bass player due to a combination of scheduling difficulties and musical differences. Vocalist Blakk and bassist Lyndon Ehlers were contacted in regards to filling the empty positions, and it was not long before both accepted the invitation. This lineup overhaul was exactly what the band needed to become what it was intended to be from the beginning. The music became more dark and sinister, and the lyrics became more thought provoking and disturbing. The visual aspect of the band also evolved as a result of the band agreeing on a new logo and artwork direction.

Storms of Genocide, the band’s self-released debut album, began to circulate around the underground and eventually caught the attention of Mike Juliano, owner of Horror Pain Gore Death Productions. It was not long before an agreement was reached and the band signed with the label. February 18th of 2014 saw the release of Enraptured by Suffering, Helmsplitter’s second album and HPGD debut. The album was recorded, mixed, and mastered by Scott Creekmore (Broken Hope, Lupara, Num Skull) at Mercenary Digital Studios during the months of September and October of 2013. Enraptured by Suffering is a merciless slab of sonic abuse that goes for the throat right out of the gate with the blazing opening track “Tyrants for Blood” and does not let up all the way through to the end of the heavier than granite closer “Summon the Leeches.”

HELMSPLITTER is a collective of talented and dedicated musicians who will stop at nothing to make their art the best that it can possibly be. This is just the beginning for a band that is just going to continue to get better and better at their craft. The current lineup has only been together a few years and is constantly improving as musicians and songwriters, and as a live act. When people are passionate about what they do you can expect them to do it for as long as possible, and considering it is a fact that a true love of music is what motivates every member of HELMSPLITTER it is clear that it is a band that will not be stopping anytime soon.