More than 30 years and a bit after its first Black Metal band was born, a handful of activists from Geneva’s Underground culture are gathering to organize a major cultural event which focus is to rehabilitate and pay tribute to Black Metal, this hidden part of Switzerland’s musical heritage.

Therefore, it’s with infinite honor and pleasure that we announce you the full line-up for this very unique three-days celebration. 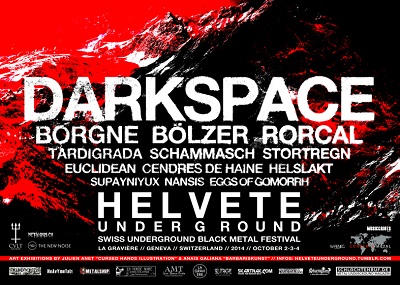 With the likes of DARKSPACE, BORGNE, BÖLZER, RORCAL, and many more, we intend to pay tribute to the greatest facet of the Swiss Underground Black Metal scene.

Extreme music fanatics Worldwide : welcome to the HELVETE UNDERGROUND FESTIVAL. Please reserve the dates – October 2-3-4 – and organize your trip to Geneva, Switzerland, for this is going to be one of the greatest extreme music festivals of the year.

Preorders and other details available online at: http://helveteunderground.tumblr.com