IRON BONEHEAD PRODUCTIONS sets March 31st as the international release date for HERESIARCH‘sWælwulf. The band’s first new record since 2011’s celebrated Hammer of Intransigence MLP, at long last, New Zealand black/death barbarians HERESIARCH return with a 7″ EP entitled Wælwulf. At three doomed ‘n’ deadly songs, Wælwulf displays that HERESIARCH have lost none of their purifying fire in the interim; if anything, their savagery has intensified to almost uncomfortable levels. But within their perpetually churning, gnawing rush of gnarled sound lies nuance and nous that few within the wider “war metal” ranks can match – and Wælwulf is the latest, most devastating proof. Cover and tracklisting are as follows: 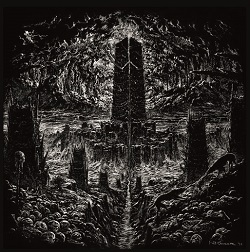