Italian – now based in the UK, gothic/prog metallers HERETIC’S DREAM have released the new video for the song ‘Outcasted‘ from ‘Walk The Time‘ the full-lenght album. The video can be viewed below:

HERETIC’S DREAM recently released the new album ‘Walk The Time‘, on October 15 in Italy and October 22 in Europe via VIDERADIO.

The album sound is totally unique, and perfectly figures the band’s ability to sweep into trash metal, goth, progressive, pop metal. “Walk The Time” exposes some of the experiences we face through our existence, the intricacy of human relationships, between father and daughter or a betrayed partner or a lifetime friend, the disguised place into a society that so often forces us to wear a mask.

The band is now on promotional tour: 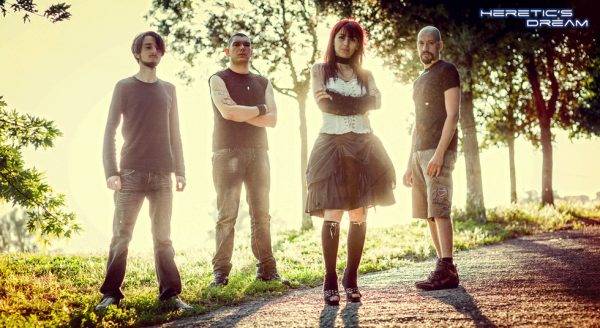 1. Outcasted
2. Chains of blood
3. Behind the mirror
4. Dreams falling
5. Believing in you
6. Shockwave
7. Fighting time
8. Connections
9. The broken silence
10. Before the storm
11. The next level

“Take your time to listen to your soul, identify your talents, and let your passion grow. Live your life to the full, explore your possibilities, seek opportunities and overcome your limits. Walk the time of your existence.“

The Heretic’s Dream project was born in 2010 when guitarist Andrej Surace and singer Francesca Di Ventura came to the UK.

Due to their different musical influences, ranging from various forms of Death Metal & hardcore to more melodic mainstream sounds found within pop rock/metal, the music they began writing was not pinned down to any one genre and held itself well within its diversity, also with the added help of English bass player Rick Sivier, who provided a classic groove bass approach and assisted in the early stages of the song writing process.

The band has gone through numerous line ups during the last 2 years, counting on musicians coming from the UK and from Italy, despite the band’s busy activity in the UK, especially in 2012. The band has performed more than 70 gigs over the last 24 months, and in November signed an endorsement deal with Markline Guitars.

The debut album, “The unexpected move”, recorded in February 2012, is available for digital download through recommended online stores such as Amazon, iTunes etc, under the Videoradio Edizioni Musicali & Discografiche recording label (associated with Italian National Television), which the band signed with in April 2012. The album has obtained numerous good reviews, both in Italy and the UK, and has been on air in different radio stations in Italy, the UK and Canada. The two official videos released for that album were awarded as Best Recommended Videos on UnoTv in October 2012.

The band has supported Blues/rock artist RICHIE KOTZEN in Rome in November 2012, and was the official support act for CRUCIFIED BARBARA on all their Italian tour in December 2012.