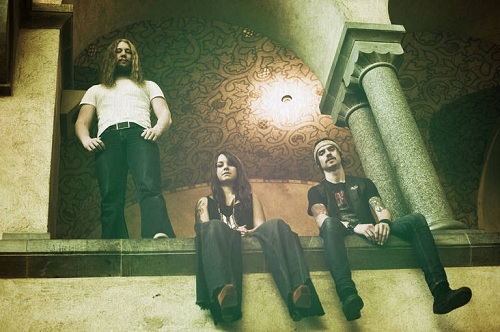 SVART RECORDS sets March 22nd as the international release date for HIGH PRIEST OF SATURN’s self-titled debut. Self-described as a psychedelic doom act inspired by classic stoner bands and ’60s and ’70s psychedelic rock, HIGH PRIEST OF SATURN are a Norwegian three piece that consist of guitarist Martin Sivertsen and guitarist-drummer Andreas Hagen’s slow-pounding riffs and beats and Merethe Heggset’s eerie vocals, which seem to resonate from another dimension. The entire High Priest of Saturn opus is drenched with swirling, menacing vintage organ sounds, played on the album by Ole Kristian Malmedal. Groovy yet epic (none of the four tracks presented here are below the nine-minutes mark!), HIGH PRIEST OF SATURN’s debut full-length is a trip. Not only does it fulfill the many promises offered by their 2011 demo (whose two songs have been re-recorded here in even heavier and more mesmerizing versions), but it also propels this trio towards the same league as Sleep and Acid King, towards the sky and beyond.