A ripping and relentless slab of true death metal in vein of DEICIDE and AUTOPSY, “Blood on Satan’s Claw” is now playing at this location.

Sacrilegious Fornication is out now on Dunkelheit Produktionen on CD and digital formats. To order, visit the links below:
www.dunkelheit.cc
dunkelheitprod.bandcamp.com

Italy’s HORRID have cultivated their bleak style of cult death metal since 1989. The band’s newest album, Sacrilegious Fornication, stays true to their roots without sounding rehashed in any way.  The evil ones rage through their rolling and martyring tracks in a brute and insanely sinister way. The music is variable yet disturbingly morbid. The genre has not produced something of similar quality in years! Fans of Satanic Death Metal can revel in HORRID‘s pure and unrelenting blasphemy. 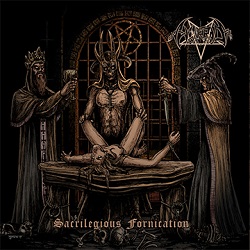 “Sacrilegious Fornication brings to the forefront that classic death metal feeling from the beginning of the nineties with raw riffs and mid tempo (for the standards of today) rhythm session.” – Dark Souls United