MORIBUND RECORDS announces June 22nd as the release date for HRIZG‘s long-awaited Individualism. Ever aptly titled, Individualism sees this one-man black metal cult perfecting his iron-willed, iron-clad craft, contorting the otherworldly mysticism of ancient black metal to his own isolationist design. Compared to 2011’s celebrated Anthems to Decrepitude, HRIZG‘s Individualism drives at both extremes – classic grimness vs. tense atonality – but arrives at a destination no less sepulchral and dynamic. Enter the realm of Individualism… 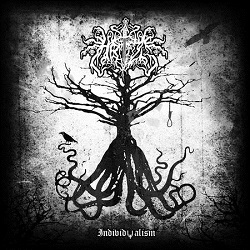 A statement from HRIZG mainman Erun-Dagoth reads: “I did Individualism as a call for the inner strength against those ones who crawl through the scene holding the banner of weakness. HRIZG plays black metal for the strongest of the strong!” A video of Erun-Dagoth recording drums for Individualism at Khazad-Dûm Studios can be viewed HERE.