Hailing from the streets of Brooklyn, New York, HULL has yet again emerged with a creation to outlive the ages. Hard at work since the release of their 2009 debut, Sole Lord, ideas were envisioned and the mighty wind of creativity brought upon this Earth the latest saga, Beyond The Lightless Sky.

Digging further into the past, the Mayan epic takes the listener through a division of two brothers and the struggles that they are faced with. One finds salvation amongst the stars and the wisdom of a stranger, while the other is mesmerized with the bloodthirsty belief of sacrifice and self mutilation. In silence lies a realm that exists outside the plane of fear.

Taking the new songs on the road, HULL embarked on a successful mission to Austin for the SXSW festival to then triumphantly return and join forces with longtime friend and talented engineer/percussionist, Brett Romnes (IATA). Within an enormous, darkened club, many nights fell into morning as the immense sound was captured for the album, before putting the recording into the hands of a mixing madman, Billy Anderson. With such experience as The Melvins, Neurosis and Eyehategod, the journey was brutally finished.

Known to behold vast sound expanses, HULL maximizes harmony and tone within one monstrous palate. Upon your brow, focus, as a furious whip of intermingling guitars propel you through the atmosphere as a low pulse resonates through your entire being while the pounding drums blanket all chasms of reality. Find yourself immersed in a musical tide as it is played out before your ears beyond the lightless sky. 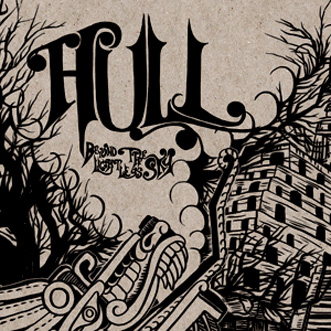 Beyond The Lightless Sky Track Listing:

1. Earth From Water
2. Just A Trace of Early Dawn
3. Beyond The Lightless Sky
4. Curling Winds
5. Fire Vein
6. Wake The Heavens, Reveal The Sun
7. False Priest
8. A Light That Shone From Aside The Sea
9. In Death, Truth

Beyond The Lightless Sky will be released on October 11, 2011 via The End Records.

Hot News – Hull: New Track Premiere Brought To You By The Village Voice