HUNTRESS is back with the follow up to their buzzworthy debut album Spell Eater, which was released in 2012.  The album entitled Starbound Beast will be released on June 28th in Europe and on July 2nd in North America via Napalm Records.  The band recorded the album at Hobby Shop Studios in Los Angeles, CA, working with famed producer Zeuss (Shadows Fall, Hatebreed, Agnostic Front). The artwork for Starbound Beast was created once again by Vance Kelly (Slayer, Ghost B.C., Mastodon).

Today HUNTRESS has unveiled the first song from Starbound Beast. The track entitled “I Want to Fuck You to Death” was co-written for singer Jill Janus by legendary Motorhead frontman Lemmy Kilmister.

“I met Lemmy through my former band Chelsea Girls. We’d play hard rock and metal covers featuring guest celebrities. Lemmy was already friends with the girls, so he played “Ace of Spades” with us and it blew my mind. We stayed in touch and would meet up at The Rainbow for drinks. So I asked him a few months back over Jack & Cokes if he’d write lyrics for a Huntress song and he said ‘Sure’. A few weeks later, I met him at the studio during Motorhead recording sessions. Lemmy handed me two two pieces of notebook paper with the lyrics for ‘I Want to Fuck You to Death’. I am beyond honored. To me, this is a love song. It is the most romantic song I’ve ever heard.” 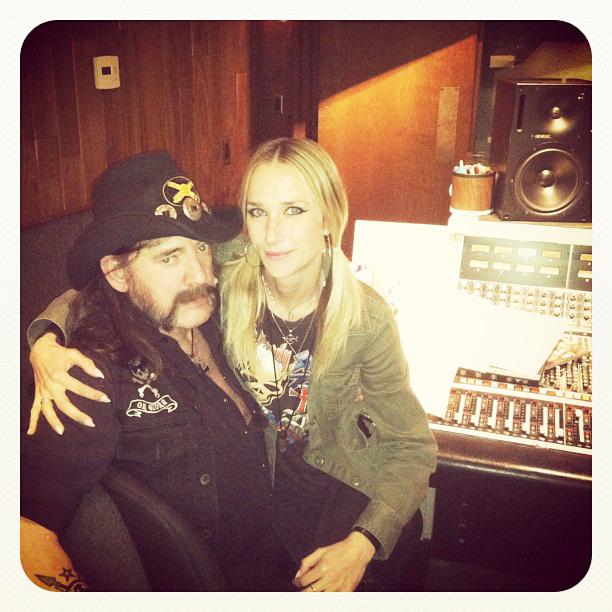 “The first time I heard Jill’s voice with Chelsea Girls, it was phenomenal. I wrote these lyrics from her point of view, the Huntress. ‘I Want to Fuck You to Death’ was inspired by her, written for her. I’ve always had a soft spot for her. And a hard spot too…”

The song is available as an exclusive stream on the HUNTRESSFacebook Page. When visiting the facebook page, clicking the “like” button will enable the audio.

In support of Starbound Beast the band will be touring across North America this summer as part of the Rockstar Energy Drink Mayhem Festival.   The band will be featured on the Jagermeister Stage alongside Machine Head, Battlecross & Others.  The tour kicks off June 29th in San Bernardino, CA and runs through August 4th in Dallas, TX.  A complete list of dates can be found below.  The band took part in the Rockstar Energy Drink Mayhem Festival Press Conference and performed live, check out footageHERE.

HUNTRESS was spawned from the preternatural union of Jill Janus with underground metal bands Professor and Dark Black. They thrive on thundering drums, heavy riffs, spectral solos and catchy choruses that come from the band‘s musical concoction of occult science and bong rips. HUNTRESSremains true to the roots of melodic heavy metal with a penchant for thrash, death and black metal.

Hot News: Huntress – On Tour with Lamb Of God