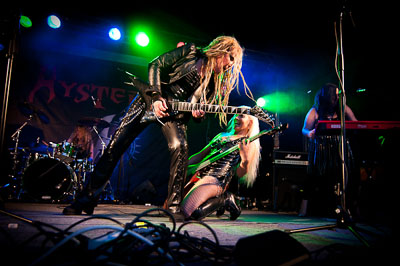 Hysterica will perform in London at Camden Underworld on November 19.

Hysterica is one of very few established female metal acts in the world. They were selected as Best New Act on the Swedish Metal Awards in 2009. With their new line up they’re now ready to conquer the world. Hysterica are in every way a live band and they spend a lot of time and energy on delivering live shows with a lot of energy and female power.

Hysterica did a very successful tour in Russia this spring, where they played sold out shows in front of huge crowds, did loads of TV interviews and headlined the Zheleznye Devy festival which is Russias biggest female voice festival.

A new album “The Art of Metal” is in the making, and for this album Hysterica felt that it was time to do something different and unique. The band wanted to unite the music with another form of art. The concept for the new album is as follows: By letting different artists interpret each song, a number of art pieces will be created. These will be presented together with each new album track. One single will be released digitally until when the album will be released in its entirety.