Necrospire, the bulldozingly heavy debut album from Chicago-based deathcore maniacs I KILLED EVERYONE is out now on Pavement Music. MetalInjection.net recently offered a sample of the disc via a stream of the album track “Eviscerated” at this location.

The album is now available in stores, online and digital retailers and at www.pavementmusic.com.

In support of Necrospire, I KILLED EVERYONE will take part in “The Night Breed Tour” with  Florida progressive metalcore act SILENCE and Indiana heavies THE OPPRESSOR later this month.
THE NIGHT BREED TOUR DATES: 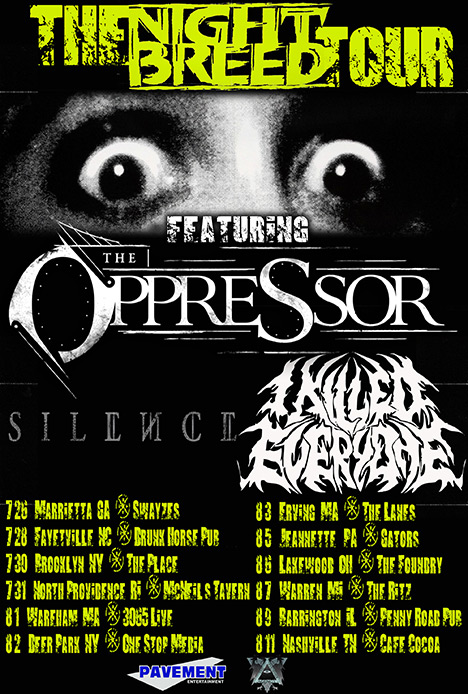 Formed in 2008, the Chicago band delivers a ferocious slab of Deathcore with Necrospire. Unlike most bands of their genre, I KILLED EVERYONE is influenced by classic death metal bands from the 90’s such as SUFFOCATION, CANNIBAL CORPSE, and MORBID ANGEL. The band incorporates many of these influences to form a unique sound of modern deathcore with undeniable classic death metal overtones. With brutal, yet understandable, vocals and blast beats galore, I KILLED EVERYONE knows how to pummel an audience. The group has taken the scene by storm and continues to build their brand of extreme music both live and through aggressive social media. Be prepared: They WILL kill everyone!

Hot News: I Killed Everyone Announces Tour With Silence and The Opressor