The Danish old-school thrashers IMPALERS will release their debut album ”Power Behind The Throne” on March 5th 2013 through the American label HPGD Productions (Mortillery, Abscess, Coffins, Skeletal Spectre, Deceased). ”Power Behind The Throne” was recorded with producer Søren Jensen at Six String Studios (Illnath, Iron Fire) in the winter of 2011, but due to some difficulties the album was delayed and now it finally see’s it release in 2013. The artwork is made by Kakak Lung Art (All Shall Perish, As I Lay Dying, Suicide Silence, Carnifex).

Singer and the rhythm guitarist Søren Crawack made the following statement about the release, signing and artwork:

“It’s an incredible relief to finally be able to release this album. After the excruciating delays we’ve had, it’s been an absolute pleasure to work with some very talented people, who made this last sprint towards the release a smooth trip. Everyone from management to record label have just been fantastic. We consider us very fortunate to be signed unto HPGD Productions, who clearly made the most sincere offer of all who was interested in signing us, so it was pretty much a no-brainer. Also we managed to track down this guy Kakak Lung, an incredible artist from Indonesia, who delivered an amazing piece of artwork for the cover. Combining all of the above ingredients with the songs we recorded a year ago, I believe we have one hell of a potent record, that we definitely can’t wait to unleash.“

Label owner Mike Juliano made the following statement about the release:

“We are honored to have Impalers join the Horror Pain Gore Death roster. This album is sure to be a favorite and early candidate for album of the year. Thrash til death! “ 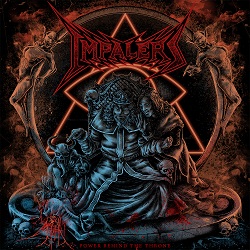 Listen to the title track “Power Behind The Throne” here (http://youtu.be/mDmswuwqJDg).

”Power Behind The Throne” can be found at the labels shop (http://hpgd.comoj.com/store/hpgd060.html) amongst many other metal shops.