The mark of a great rock song lies in its ability to catch ears and shake asses after all the bells, whistles and bullshit has been stripped away. In 2014, you’ll be hard-pressed to find a rock band more stripped down than IN THE WHALE. Two dudes, each with a fistful of killer tunes and a million miles of highway underneath their shoes, IN THE WHALE embodies the essence and energy of pure rock ‘n’ roll.

On June 24, the band will release their debut full-length record, Nate & Eric. Featuring seven of the most raucously entertaining and refreshingly honest tracks set to tape this year, Nate & Eric is the antidote to the current plague of over-processed and recycled rock.

Check ’em out at www.inthewhalesucks.com. 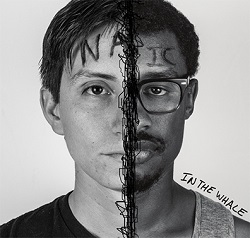 ERIC SIDE
On A Roll
Girlfriend
Sunbeam

In the Whale is a high energy, two piece rock band hailing from Denver, CO. Members Nate Valdez (vocals and guitar) and Eric Riley (drums and backing vocals) have been making no nonsense, balls-to-the-wall rock songs since they formed the band in 2011.

Since then, the two have stayed busy exploring the seedier sides of Denver that ­inspires their music. In 2012 they released their first EP, Cake, and followed it up with the EP,

Eric, in late fall 2013. In between releases the band has been featured in national commercials for Victory Motorcycles and have played with a stupid number of artists you’d happily phone home about. In addition to sharing stages with bands like Murder by Death,­ Local H, Reverend Horton Heat and Electric Six in their hometown, the band has hit the road and played alongside The Airborne Toxic Event, Agent Orange, Bob Log III, The Pack A.D. and Slash. In the Whale released third EP titled Nate in late-Spring 2014 and continue relentlessly touring until they have conquered everything. The Nate and Eric EPs will be released together on one relentlessly rocking record titled “Nate & Eric.