As the first single, INDICA release ‘A Definite Maybe’ on iTunes today. The emotional track is out of their upcoming new record »Shine«, coming up on January 24th, 2014.

You can order the track here:

The lyric video clip is also available at the Nuclear Blast YouTube channel – check out the following Link: http://youtu.be/knVOciErq_I 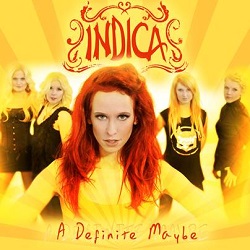 Four long years have passed since »A Way Away«, their sixth studio album and also the bands’ premiere in the English language, came out. Now the ladies are back and stronger than ever. The basics for »Shine« reach back to 2011, when Jonsu started working on songs – based on a dream of hers. The result is a conjuring essential Symphonic-Pop creation, with sparkling character, beautiful catchy melodies and lots of soul.

»Shine« will be released on January 24, 2014 via Nuclear Blast, giving you a real kick-off start for the New Year. One thing can already be stated without any doubt: INDICA has never been better. And »Shine« shimmers as bright as the beautiful musicians themselves high in the music sky.

You can pre-order your copy of »Shine« here: http://smarturl.it/INDICA-Shine

INDICA – A Way Away