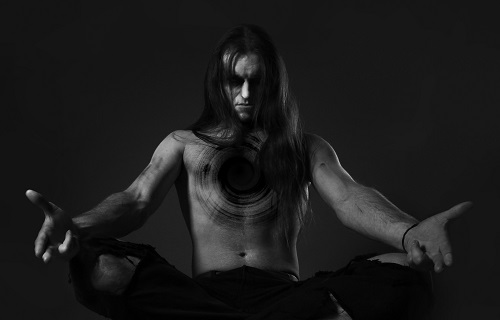 Debemur Morti Productions is pleased to shed some light on the fantastic, and much awaited, INFESTUS upcoming new opus.

What better way to introduce you to “The Reflecting Void” than a few words from the maestro, Andras:

“The Reflecting Void. A daring glimpse behind the mirror-like emptiness of the mind that only serves one purpose: to hide what lies underneath. A mental barrier unconsciously created by the existential need to burry unbearable emotions and experiences that corrode the “soul”. But to burry is not to delete. The cancer of the mind dwells hidden under this cloak of void. And while constantly flourishing, the light of life fades into an indistinguishable grey haze, “decolorizing” the view and encircling your existence. You may be able to reflect the darkness within and to a certain degree process it. But you will never leave behind the things that defined and changed you. Catharsis is an illusion.” 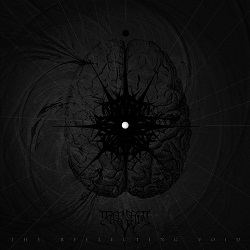 The track listing is as follows :

“The Reflecting Void”, the true masterpiece of one the brightest stars on the extreme metal scene, the triumphant ascension of sadness, madness… and darkness !

This somptuous piece of sophisticated and atmospheric Dark Metal will be released on April 25th (May 13th in North America) in CD, vinyl and digital download version by Debemur Morti Productions.

The demon INFESTUS rose from the ashes of the formation Dunkelfront in 2003. After releasing a demo, the debut album and a split CD, guitarist Harbarth left INFESTUS in 2006 owing to a lack of time and devotion. Thereafter, INFESTUS developed into something more than just a musical appearance in this world. It turned into an entity which totally embodies their anti-social, mind- and life- devastating disease with more efficiency and devotion than ever before. Andras took over the whole instrumentation, whereas Dagon concentrated on the vocals. In 2008, they created the concept album “Chroniken des Ablebens”, which was released by Debemur Morti Productions and received excellent reviews. But this was not enough. After intonating the moment of dying and expanding these few seconds to the length of an album, Andras was driven by the idea of using his very personal experiences, having emerged from these abysmal depths. He was determined to finally gain catharsis by creating “E x | I s t”. However, Dagon somehow slowly detached from the musical side of the entity INFESTUS, which then in the summer of 2010 forced them to determine that Andras had to go on alone by taking over the vocals. “E x | I s t” was finished in the summer of 2010 and is once again born into this world by Debemur Morti Productions. INFESTUS still dissociates from all political ideas, fraternities and other unnecessary coalitions. INFESTUS solely renders homage to everlasting darkness, the perfection of nocturnal forests and all types of mental depravities.