Rising black metal dark stars INQUISITION have announced a string of summer dates including shows at prestigious festivals such as Under The Black Sun (DE), Brutal Assault (CZ), Party.San Open Air (DE), Motocultor (FR), Metal Mean (BE) and Beyond the Gates (NO). The tour will kick off at the Little Devil in Tilburg on the 3rd of July and afterwards the American duo will continue to ravage Europe until a final black mass at the Pussy A GoGo in Stockholm (SE) on August 30th.

INQUISITION are touring in support of their current album “Obscure Verses For The Multiverse”, which is still available in various formats via the Season of Mist shop. 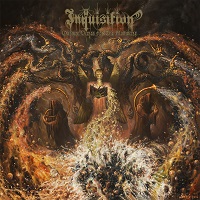 “Obscure Verses for the Multiverse” is a revelation. This album will mark a turning point in the steady rise of INQUISITION from the murky underground to a major act of the Black Metal scene. There is no denying that IMMORTAL provides the stylistic matrix on which the Americans develop their own sound. Harsh but melodic and catchy riffing combines perfectly with blasting outbursts and dark, moody passages that are strengthened by rasping vocals with a sinister raven-like quality. INQUISITION provide credibility, musical quality and a huge following, which they acquired through years of powerful live performances as well as unleashing strong releases, while clawing their way from the bottom with relentless energy and faith in their craft. This critical mass of die-hard fans became visible when the band played at this year’s edition of Hellfest in front of more than 10.000 raving spectators. INQUISITION are from the US city of Seattle, Washington although originally formed by frontman Dagon in the South American state of Colombia in 1989. At first the band followed the path of Thrash Metal in what Dagon calls “chapter one”. Three demos were released during this period, before the musician moved back to the United States in 1996. There Dagon met drummer Incubus, who joined in 1997. Together the duo created their debut full-length “Into the Infernal Regions of the Ancient Cult” (1998), which immediately created a buzz in the netherworld of the Black Metal genre. Each of the following four albums deepened their impact within the scene, but due to unknowingly signing to a controversial label being barred from mainstream recognition in parts of Europe. This will change now. INQUISITION are ready to set the record straight and openly meet any given question. “Obscure Verses for the Multiverse” is destined for dark glory. Witness this black beast rising!

INQUISITION – Bloodshed Across The Empyrean Altar Beyond The Celestial Zenith

INQUISITION – Into The Infernal Regions Of The Ancient Cult (Reissue)