Brooklyn based INSECT ARK is the solo project from Dana Schechter, known for her work with M. Gira’s Angels of Light (Swans) and her own band Bee and Flower. Creating her personal soundtrack to the human psyche’s underbelly, INSECT ARK weaves a brooding, textural landscape, a starless night spiked with sparkling moments of light and flash, using delay drenched lapsteel, distorted synthesizers and bass, and sparse drum programming. She is touring in support of her new 10” EP, “Long Arms” (2013, Geweih Ritual Documents)

JOHN 3:16 was started in 2007, as a studio-only project but after Heat From a DeadStar (Ace of Hearts Records/ Boston) disbanded in 2010, JOHN 3:16 became the official live act of Philippe Gerber. The 5-track EP “Sinners in the Hands of an Angry God” (2011) was critically acclaimed and presented JOHN 3:16’s newly musical direction “synthesizing many different styles and genres such as those designed as psychedelic-electronic analog circuit no-wave, industrial, ambient, shoegaze, pop, trip-hop” (Terapija Webzine, Croatia)

“There’s a certain shoegazing aspect of the record looking to send the listener upward, tugging against the sombre inward reflection to haul the listener toward the skies on waves of distorted melody. Quite how the album defies physics and achieves both simultaneously is perplexing to say the least” – Jack Chuter / Rock-A-Rolla (UK) 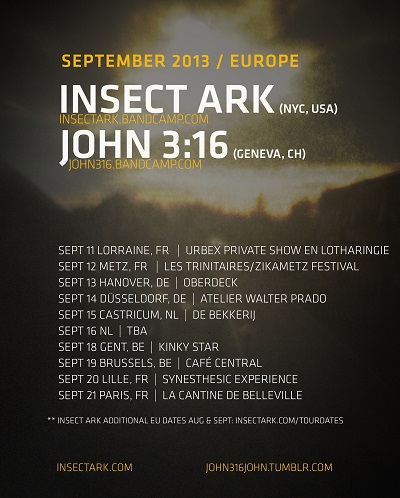