For over twenty years, INTERNAL BLEEDING has been at the forefront of the underground death metal scene, boasting a relentless DIY work ethic, consistently intense live performances and a commitment to composing some of the heaviest music possible, their breakdown-laden approach directly responsible for the establishment of an entire subgenre of death metal, aptly titled “slam” (a term they began using as early as 1992). Founded in 1991 by guitarist Chris Pervelis following the demise of original band, Autumn Reign, it all began with a case of 300 blank tapes reportedly “found” at a local university. The tapes provided the inspiration to set up a four-track to capture The One Dollar Demo. The following year, INTERNAL BLEEDING recorded their Invocation Of Evil demo, which went on to sell an impressive 5500+ copies through now-defunct Wild Rags Records. The band returned to the studio to track another demo in early 1994. The resulting Perpetual Degradation remains a certified classic in the annals of death metal. 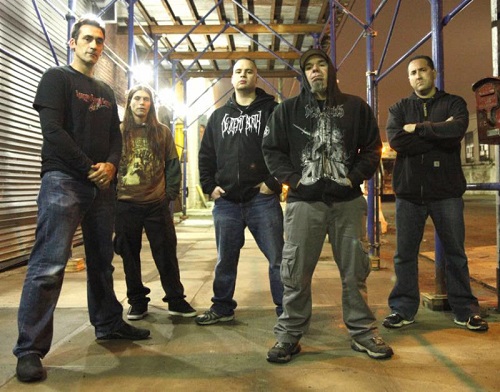 Maniacal self-promotion combined with a tireless dedication to their craft, the band eventually made their way to 1994’s Milwaukee Metal fest, where their captivating live show possessed the eyes and ears of Pavement Music, who released their Voracious Contempt debut in 1995. Following a slew of tours both stateside and abroad, label and lineup shifts and four more works of sonic brutality with 1997’s The Extinction Of Benevolence, 1999’s Driven To Conquer, 2000’s Alien Breed compilation and 2002’s Onward To Mecca, it seemed the band had virtually disappeared without warning.

In early 2011 however, Pervelis decided to pick up the proverbial pieces and contacted original members Bill Tolley and Brian Hobbie. The three agreed to reunite and began re-learning INTERNAL BLEEDING‘s classic back catalog. With the addition of Jason Liff on bass and legendary frontman Keith DeVito (ex Suffocation, Catastrophic, Pyrexia) handling vocals, the band is again poised to level all in its path. Last month, the band officially signed a two-record deal with Unique Leader Records. Their fifth studio album, Imperium, will be out in the Fall of 2014.

In the meantime, check out the Imperium album teaser at THIS LOCATION.