After a successful Canadian headlining tour extreme progressive metallers INTO ETERNITY are prepping to make their return to the United States as part of the North American Devastation Tour with SINGLE BULLET THEORY and RIKISHA. Kicking off on August 9th at the Blue Pig in Cudahy, WI, the North American Devastation Tour will keep INTO ETERNITY on the road until August 24th in St. Paul, MN. Due to circumstances beyond the band’s control, the August 7th show at North Hill Inn in Brandon, MB, Canada that was to precede the tour has been canceled. INTO ETERNITY would like to extend an apology to their fans in Brandon and hopes to reschedule as soon as possible. 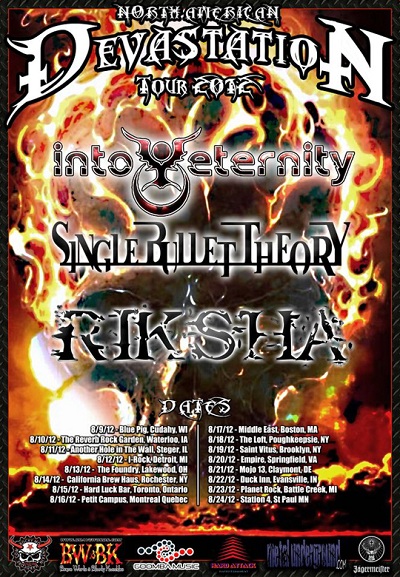 INTO ETERNITY released the “Fukishima” single in February of this year, which dealt with the struggles and perseverance of the Japanese people in the wake of the Fukushima Daiichi, Japan disaster. The single can be purchased at intoeternity.bandcamp.com/album/fukushima-single and followed the “Sandstorm” single released the year prior, the band’s first new music since 2008. It too is available for purchase at intoeternity.bandcamp.com/album/sandstorm-single-2.

Hot News: Into Eternity – Posts Video Update From The Road

INTO ETERNITY – The Incurable Tragedy