IRREVERENCE have chosen “SHREDS OF HUMANITY” as title of theier new studio-work, the fifth full lenght of the italian thrashers.

The artwork has been committed to the legendary german illustator Andreas Marschall, well known artist in the metal scene thanks to his collaborations with bands like KREATOR, BLIND GUARDIAN, DIMMU BORGIR, IN FLAMES, RUNNING WILD and many more. 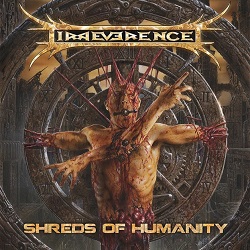 After the recent deal signed with NADIR MUSIC, the band announce that will enter the studio on MARCH 7th 2014 to start recording sessions. The release of the new album is foreseen on Spring 2014. To follow the new album cover.