Italy’s own The Doomsayer awaited debut album “Fire.Everywhere.” is set to be released worldwide on October 28th, 2013 via Candlelight Records.

The band, formed in 2012 from the ashes of Stigma, locked away in Oxfordshire, UK, to record their debut opus at Ridgeway Studio (Bury Tomorrow, The Haarp Machine) and then had it mastered at Lambesis Studios (As I Lay Dying, Zao, Winds Of Plague) in San Marcos, California.

The result has stepped it up a notch above and beyond the perceptions of what these guys were expected to write. “Fire. Everywhere.” boasts infectious melodies while keeping as unrelentingly heavy as their previous project ever was — if not more!

Here’s what former Bring Me The Horizon/Bleeding Through’s and now I Killed The Prom Queen’s guitarist Jona Weinhofen had to say: “I had the good fortune to receive a sneak preview of the new The Doomsayer record, “Fire. Everywhere.” I’m proud to call these guys my friends and they’re setting a benchmark for Italian metal/hardcore bands. Look forward to seeing these guys conquer Europe and the rest of the World real soon!” 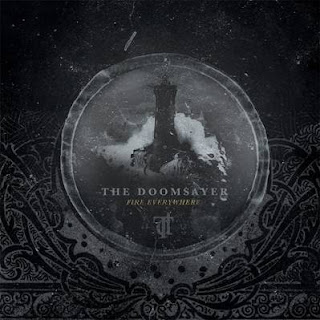 The outstanding album artwork, created by Jon Barmby (Architects, Deaf Havana, Your Demise) is available below.

The band also shot a video for the first single “Diamonds” Set Sail Studios’ Steven Prebble (Bury Tomorrow, Bleed From Within, The Soulless) at a beautiful location in the French alps. Here’s the trailer: http://youtu.be/ERXqZoistg4