“No Turning Back!” – the classic JACK STARR’S BURNING STARR album from 1986, will be reissued in July via Skol Records. This will be the first official CD re-release of this album since 1998: the album got new artwork (painted by the famous Polish artist Tomasz Oracz), got remastered by Bart Gabriel (CRYSTAL VIPER, SACRED STEEL, LONEWOLF), and will include 2 bonus tracks and thick booklet with all lyrics and many previously unseen photos. CD will be limited to only 1000 copies, and its official premiere has been scheduled for July 25, 2012. 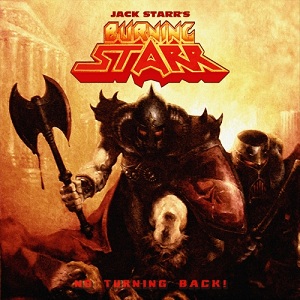 “No Turning Back!” – which is often labeled as “one of the best US Power Metal albums ever” – was recorded by the following line up:

“Land Of The Dead” was released on November 11 via Limb Music. The CD was produced by Bart Gabriel, and features cover artwork by Ken Kelly (RAINBOW, KISS, MANOWAR). “Land Of The Dead” was recorded by the same lineup that was responsible for 2009’s “Defiance” album: Jack Starr on guitar, Ned Meloni on bass, Kenny “Rhino” Earl (ex-MANOWAR) on drums, and Todd Hall on vocals. The CD also features guest appearances by David Shankle and Ross The Boss (both ex-MANOWAR) on lead guitar, and Marta Gabriel (CRYSTAL VIPER) on grand piano and keyboards.