Following up on the success of his latest studio album, “Impermanent Resonance”, Dream Theater’s James LaBrie is set to release a new Digital EP entitled “I Will Not Break” on January 6th, 2014 in Europe and January 14th, 2014 in North America via InsideOutMusic.

The exact European release dates per country are as follows:

The “I Will Not Break” EP will include 9 (!) tracks and a total playing time of 38 minutes for a special low-price with the following tracklisting: 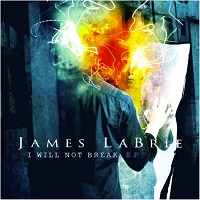 While the opening title track is the album version taken from the “Impermanent Resonance” release, the songs 2 and 3 were previously only released physically as Digipak bonus tracks. Song 4 is an alternate mix version and songs 5 as well as 6 are special demo versions, all previously only released physically as bonustracks on the Digipak and the Japanese edition for the “Static Impulse” album in 2010. Songs 7, 8 and 9 are special dub step / electronica re-mixes of “Static Impulse” songs, previously unreleased (Song 7 was only available physically in Japan before). The re-mixes were done by US-based DJ’s Jason Miller, Mutrix and NeonGenesis. The cover artwork for the EP was once again designed by Gustavo Sazes / abstrata.net (Arch Enemy, Kamelot, etc.).

You can pre-order the “I Will Not Break” Digital EP here: http://smarturl.it/jlb_iwillbreak

Check out the EP’s title-track “I Will Not Break” in a static video via the IOM YouTube channel here: http://youtu.be/Nj8aAo3O06E

James LaBrie checked in to comment about the upcoming EP release as follows:
“Hey Everyone! Matt, Marco, Peter, Ray and yours truly are very pleased to release this digital EP. It will show some of the songs with alternate mixes as well as letting you hear Matt’s exceptional voice with some of the songs in their demo versions. We also had 3 of the songs mixed in dub step stylings to give them a somewhat interesting flavour and twist. Hope you all enjoy this release, I personally think it is very cool. All the best in the New Year and see you out there….”
Most recently, the James LaBrie track “Lost In The Fire” was used by the Swedish sound library company Toontrack Music to promote the launch of one of their new products. Check out the trailer here: http://www.youtube.com/watch?v=yPlAcqmqY3Y

All available European physical formats of “Impermanent Resonance” can be purchased here: http://www.insideoutshop.de/Search?q=impermanent