“In Somniphobia” is a sonic nightmare that lasts for more than an hour. The musical direction is pretty much far removed from that of the last two albums, “Scenes from Hell” and “Hangman’s Hymn”. It is not easy to describe its direction, but probably one can say that it is something between “Imaginary Sonicscape”, “Hail Horror Hail” and “Gallows Gallery”, or rather, simply a nightmarish version of “Imaginary Sonicscape”. Put heavy metal, classical music, jazz, Indian traditional music, Stockhausen, and Xenakis into a cauldron of hell and stir it, you’ll get “In Somniphobia”. This is surrealistic, ethnic, druggy, atmospheric and definitely scary! Lots of vintage gems were used in the making of the album such as a Minimoog, Prophet-5, Clavinet D-6, Roland RE-201 Space Echo etc. along with some ethnic instruments like Indian Sarangi, Sitar, Tampura, and Tabla. Kam Lee (ex-Massacre, Bone Gnawer etc.) and Metatron (The Meads of Asphodel) cooperated with the lyrics and the vocals for “Lucid Nightmares”.

Sigh were formed in April of 1990 and did two demos before the ‘Requiem for Fools’ 7″EP on Wild Rags, which led us to sign to Euronymous’ Deathlike Silence Productions. The debut album ‘Scorn Defeat’ was recorded in 1993, but Euronoymous was murdered before its release, and Voices of Wonder Records took over DSP and released the ‘Scorn Defeat.’ Sigh then moved to Cacophonous Records and released: Infidel Art (1995) Ghastly Funeral Theatre (1996 mini album) Hail Horror Hail (1997) Scenario IV: Dread Dreams (1999) 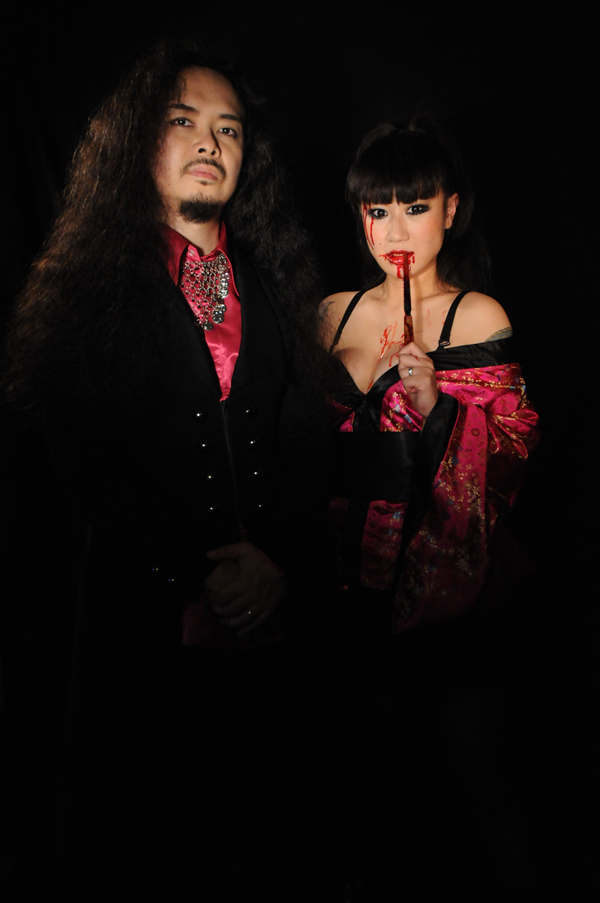 ‘Hail Horror Hail’ was chosen as one of the most important 100 heavy metal albums of the nineties in Terrorizer Magazine. Sigh signed to Century Media Records and then released ‘Imaginary Sonicscape’ in 2001. The album was again well received worldwide. The sixth album ‘Gallows Gallery’, the debut album for the newly recruited Junichi Harashima, was released in 2005 by Baphomet/Season of Mist Records (US) and Candlelight Records (Europe). It was chosen as No.14 album of 2005 in UK’s Terrorizer Magazine. (This was re-mastered by James Murphy and re-released through The End Records in 2007.) The seventh album ‘Hangman’s Hymn’ , which is the fastest and the most symphonic album by Sigh, was released in 2007 on The End Records (US) and Osmose Prodcutions (Europe). “Me-Devil” from this album was featured on the Canadian heavy metal documentary movie “Global Metal” directed by Sam Dunn.

‘A Tribute to Venom’ was released in September 2008 on The End Records to coincide Sigh’s first US tour with Canada’s Unexpect. This is the first stuff to feature Dr. Mikannibal who joined the band in the end of 2007. The eighth album “Scene from Hell” was worldwide released in January 2010 on The End Records again. This features the real orchestral instruments such as trumpet, trombone, tuba, flute, oboe, clarinet, string quartet etc., and the album is definitely the most symphonic and intense by Sigh.

In 2011 Sigh signed to Candlelight Records and recorded the ninth album “In Somniphobia” due out in March 2012. This album is by far more musically varied compared to the last two albums. Put heavy metal, classical music, jazz, Indian traditional music, Stockhausen, and Xenakis into a cauldron of hell and stir it, you’ll get “In Somniphobia”. It is a pure sonic nightmare that lasts more than an hour.

Sigh have experienced lots of the US/ Europe tours including festival appearances such as Damnation Festival (UK), Inferno Festival (Norway), Maryland Deathfest (USA), Hellfest (France), Brutal Assault Open Air (Czech Republic) etc. Also they played in the Asian countries such as Malaysia, Singapore, Taiwan and so on, and the first appearance in China is being planned for October 2011