Jolly Roger Records is proud to announce the release of STRIKE – BACK IN FLAMES.

It contains the self titled album of Italian Strike, originally released in 1981, plus 4 bonus tracks, all remastered.
“Strike” is the first italian HM album ever, before Vanadium and Vanexa! The story of all Italian HM scene started here!
Cd & Lp will be available on late January 2013.

Listen to “Short cut to hell” on this link, following this link you can see a videoclip presentation of the album. 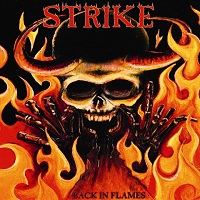