Joonas “Jope” Koto officially joins OMNIUM GATHERUM as a new guitarist and backing clean vocalist, so OMNIUM GATHERUM is a twin guitar squad again and what’s even better is that now we have Jackson guitar tour de force on both sides of the stage! He have been playing already a big bunch of gigs with OMNIUM GATHERUM as session live member as the previous guitarist Harri Pikka left the band over a year ago, and Jope was even filling upHarri in some gigs even before we separated ways.

Jope have been Markus’ partner in crime in a progressive metal band Malpractice for many years by now, so he was the first, the most natural and the only candidate for the job for us and gladly we got him on board! He have been playing and recording previously in To/Die/For and Hateframe too, so he is a hard core professional dude. 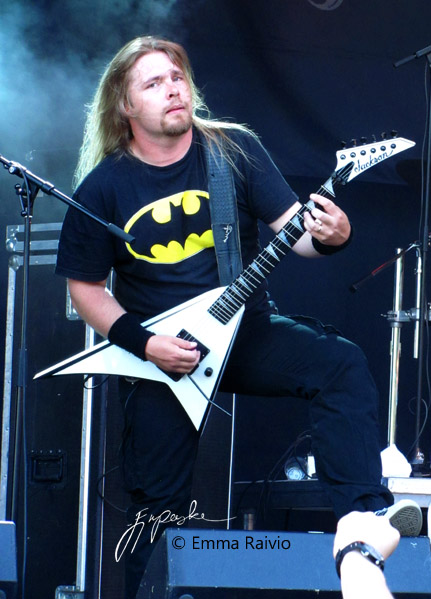 Joonas’ statement: “After two years as a session guitarist the guys finally asked me to join OMNIUM GATHERUM and I didn’t hesitate one second! From theget-go I have felt like part of a family. The guys are very great as persons and professional as musicians. I’m very happy and proud to be a part of such a great band of brothers.”

OMNIUM GATHERUM proposed Joonas on stage during their performance atlast weeks gig on Finland’s Sauna Open Air festival where they the band was opening directly for Ozzy Osbourne.

Next OMNIUM GATHERUM summer festivals will be:

After that the band will head to Finnish club tour in September and
“Neckbreakers Ball” European tour in October/November with Dark Tranquillity, Eluveitie, Death Angel, Varg and Mercenary.