Spanish melodic death band JOTNAR has released two videos from their performance at this year’s edition of the Metalcamp 2012 festival, which was held August 5th-11th in Tolmin, Slovenia.

The first one is a two-minute video clip preparing to take the stage and walking onstage with them, while the second one is a live version of the song “In Process”, from the album “Giant” released on May 7th via Murdered Music/Coroner Records.

The video of “Walk On Stage At Metalcamp 2012” can be seen below.

If you can’t see the video please follow this link: http://www.youtube.com/watch?v=CF71UO9IMZc

JOTNAR will close the “Giant Tour” with several shows in Spain as well as a Swedish tour, visiting cities like Gothenburg, Stockholm. The band has also been confirmed for this year’s Rockbitch Boat, a 3 days festival in a cruise from Stockholm to Riga set to take place October 27th-29th with bands like The Resistance (ex In Flames), Skitarg, etc… (For more information about this cruise, visit www.rockbitchboat.com) 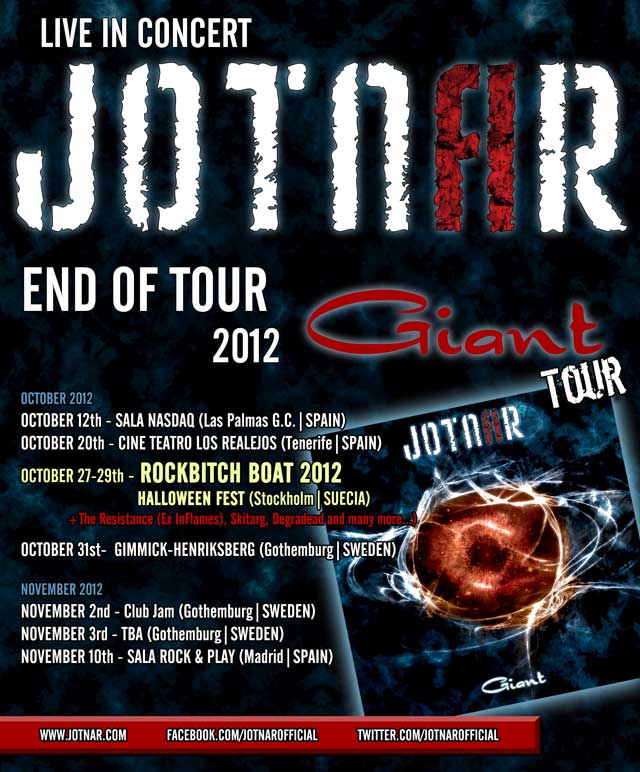 After this, the band will keep apart from stages for a few months for heath issues of their guitar player Ben Melero, who will be undergo a surgery for a injury in his left shoulder, which will force him to rest for 3 months. In this time, they will enter in studio and to prepare and record  the next album for which they have already 20 songs to make the final  selection for the album.

More info about the band at  http://www.facebook.com/JOTNAROFFICIAL

Hot News: Jotnar – video interview about the recording of the new album and more