Psychedelic rock with mammoth grooves, fat riffs, and seriously catchy songwriting, the follow-up to the well-received Green Mosquito EP is statement album to say the least. Few bands are able to bridge the divide between psychedelic hypnosis and penetrating songwriting like JUPITER ZEUS does on On Earth. Take the trip and reap the rewards!

On Earth can be streamed in its entirety and purchased at magneticeyerecords.bandcamp.com/album/on-earth 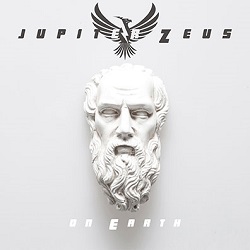 “Jupiter Zeus are the kind of band who really have no true peer.”
– Two Guys Metal Reviews

“It’s been a long time since a band struck a chord this deep in me.”
– The Ripple Effect

“With a blend of space rock, stoner and 90´s rock, JZ´s new album ‘On Earth’ sounds like a mix between Hawkwind, Atomic Opera and Queens of the stone age.”
– RothNRoll

Tucked away in Perth, Western Australia, Jupiter Zeus are the very definition of a band who seem to have come from nowhere… but their arrival – laden with walls of guitar, hypnotic rhythms and almost psychedelic vocals – is far from quiet. Debuting with the stunning Green Mosquito EP, it’s quite apparent that Jupiter Zeus aren’t exactly first timers. Their previous incarnation, Nebula, boasted a similarly cosmic slant to the heavier side of rock, and the band were pioneering in breaking ground in South East Asia, earning solid fan-bases in Indonesia and Malaysia. With a similarly global scope, but the advantage of experience at their disposal, Jupiter Zeus are looking past the horizon of the Indian Ocean to a big world of endless possibilities.

At its heart, the band’s music is about songs… epic, soaring and teaming with hooks. The decorations they put on these songs – tastes of the last 30 years of rock music – identify and define the band on a more specific, potent level. Atoms of worlds colliding, exploding into new compounds and creating new life. A self-evolving universe of sound.

From the stage or simply blasting in your car; the sound of Jupiter Zeus is as monolithic and grand as their namesakes.