SUPERBALL MUSIC proudly welcomes JUST LIKE VINYL to their eclectic and growing roster, which includes Blaqk Audio, Matt Skiba & The Sekrets and …And You Will Know Us By The Trail Of Dead.  Founded by THE FALL OF TROY’s guitarist/frontman Thomas Erak, JUST LIKE VINYL has been turning heads with their incendiary live shows since their 2010 genesis. The band’s self-titled, self-released debut Just Like Vinyl hit the streets in December of 2010 and the band toured throughout 2011. SUPERBALL MUSIC caught JUST LIKE VINYL’s amazing live show at the 2011 SXSW Music Conference.

Label head Thomas Waber explains, “We saw these guys playing at SXSW and they absolutely blew us away. One of the most energetic bands I have seen in a while! We are very pleased to start working with Just Like Vinyl.”

Erak adds, “We couldn’t be happier being a part of the Superball family/roster. There’s a lot of really talented and caring people at the label and we are excited as hell for what the future holds.” 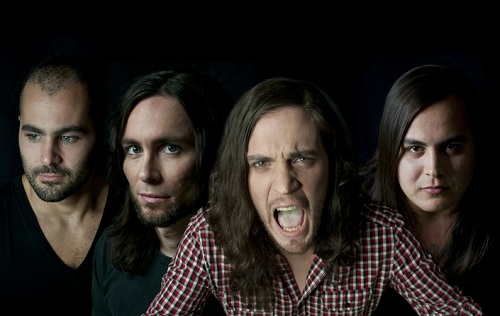 While Erak’s distinctive guitar playing will be familiar to his old fans, JUST LIKE VINYL incorporates influences as diverse as Nirvana, Faith No More, and At The Drive-In to create a sound of their own. “We love all kinds of music,” muses guitarist Jake Carden, “I will incorporate any of my skills or background to find what I think each individual song is asking for.”

The SUPERBALL MUSIC debut from JUST LIKE VINYL is set for a late summer, 2012 release.