Comments the band: “’Sufferer’ is an onslaught of technicality and intensity mixed with grind oriented breaks and blasts, blistering from beginning to end. It really shows the combined elements of technical, and heavy riffing Aberration of Man has to offer!”

Scrape your ears to the pile-driving animosity of “Sufferer” at THIS LOCATION. 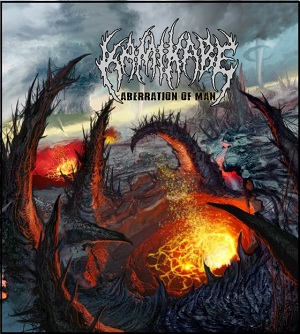 Commended for a 33-run time “chock full of furious and complex, yet pristine brutality that blurs the who deathcore/tech death metal line with aplomb,” by Teeth of The Divine, Aberration Of Man is a reference to the inevitable demise of mankind and the confrontational sounds of societal ruination. Aberration Of Man was recorded and produced by Brette Ciamarra at Studio 344, features guest vocals and lyrics by The Faceless’ Geoff Ficco on the track, “Only the Dead Rest.”

“KAMIKABE play some of the rippingest, most ferocious death metal I’ve heard in some time. I’d guess that these guys would cite Spawn of Possession and Nalpalm Death as big influences, a dandy combination for fans of fast death metal.” – MetalSucks