Kaotoxin Records is going to grind your face right the hell off with the release of In Grindo Veritas: A Collective Work of French Grind Intoxication. Due out on July 2nd (a day later in North America), In Grindo Veritas features 44 tracks by 37 French grinders. That’s over an hour of grind for the price of a single!

VS-Webzine has posted an exclusive stream of the entire compilation. Strap in, alert your next of kin and grind away at this location.

In Grindo Veritas is available in digital and CD formats at listen.kaotoxin.com. 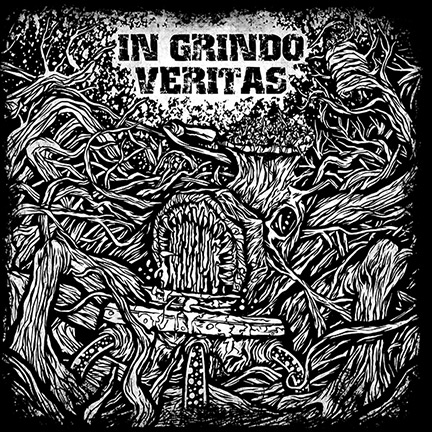 A gathering of 37 of France’s up-and-coming Grinding acts along with some renewed veterans (Gronibard, Pulmonary Fibrosis…) with either previously unreleased tracks (the vast majority) or exclusive versions (Nolentia, Trepan’Dead, Gronibard) for In Grindo Veritas: A Collective Work of French Grindcore Intoxication was mastered by Dan O’Hare of Total Fucking Destruction at the Mark-It-Zero studios (Brutal Truth), curated by Florian of Department Of Correction, and features artwork by outstanding artist Luis Sendon (Brutal Truth, Obscene Extreme Fest, SWR Fest). From the crusty shores (Nolentia, Grist…) to the grinding Death Metal ones (Diktat), from the Goregrind insanity (Foetal Injury, Defecal Of Gerbe, Pulmonary Fibrosis, Gronibard…) to the technical Grind (Department Of Correction…), from traditional Grind (Yattaï, FaxE…) to cyber Grind (Mulk…) every subgenre of the 30 years old yet still raging Grindcore movement is featured, with a truck load of killer bands for the listener to discover.