Exactly one week to go until the release of the debut album “Survival Of The Fittest“! We hope you’re getting as excited as the band are themselves. To make the wait a little shorter the band have uploaded a preview snippet of the bonus track “The Season Of Revenge” for you: http://soundcloud.com/krampusfolk/new-the-season-of-revenge

Also, as many fans have asked about it, singer Filippo has taken some time to explain the album’s very distinctive cover artwork: 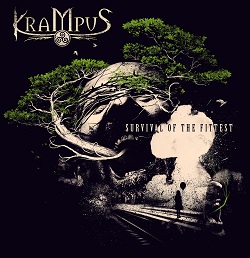 “The Artwork for ‘Survival Of The Fittest’ is a vision of the frustration of men entangled by the modern society and their striving toward what is natural. It is an explosion of constricted needs and insticts against this dying world; it’s the revelation of the Fittest.

“The Fittest” is the one that deserves what he’s achieved, and the standing he holds is not one of brute force but of merit. In this world he’s trapped with the mediocrity of the weak, those who fear to lose the privileges and certitudes they achieved without merit to the detriment of those who were worthy. The fittest envision a return to the nature that doesn’t know envy, corruption and injustice.”

Your next chances to catch Krampus live are: