KRAMPUS – FACING THE FUTURE RATHER THAN THE PAST, RE-KINDLING EMBERS OF HONOUR, PRIDE, TRADITIONS AND FREEDOM.

„In anticipation of our upcoming full-length album “Survival Of The Fittest“, we have updated our web presence! www.krampusfolk.com shall be your source for any Krampus-related information. More features will be added as we’re approaching the release date! Also check out the following official Krampus sites: 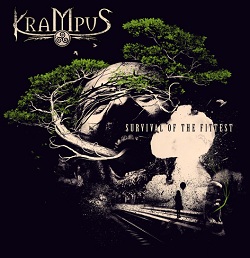 The Udine, Italy based Modern Folk Metal band Krampus can safely be regarded as the most promising and fast-rising star in their genre, all the while further expanding the boundaries of Folk Metal as we know it. With no less than 8 band members and an extensive use of traditional folk instruments, they invite to draw comparisons to the very elite of bands that devote themselves to bringing together old and new.

KRAMPUS are confirmed to play METALCAMP in August as well as the so-called HEIDENFEST tour throughout Europe in October/November alongside WINTERSUN, KORPIKLAANI, VARG and TROLLFEST.