As previously announced, Metal Mind Productions will re-release the debut album by the best Polish hard rock band –Kruk. The album entitled “Before He’ll Kill You” was first released in 2009 and now will be available again in a new digipak edition enriched with three bonus tracks recorded live in 2011. The release date is scheduled for February, 24th in Europe and March, 11th in North America (via MVD). The album should be interesting for fans of such big Artists as Deep Purple, Led Zeppelin, Black Sabbath or DIO.

Today, you can watch the video promoting the album. “Lady Chameleon” video is available on the band’s official channel on YouTube in THIS location.

In mid-January, the band will enter the studio to record material for a new, fourth album which will be released by Metal Mind Productions later this year. More information coming soon! 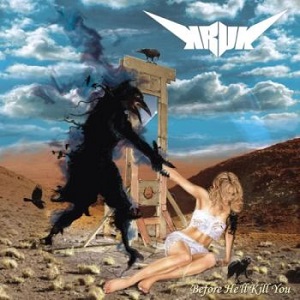 The band was formed in 2001 by Piotr Brzychcy and Krzysztof Walczyk. The band members were heavily inspired by Deep Purple, Led Zeppelin, Black Sabbath and Uriah Heep and it was these influences that shaped Kruk’s music, placing it within a classic rock framework. In 2006 Kruk recorded the album “Memories” with Grzegorz Kupczyk (Ceti’s & ex-Turbo’s vocalist). The album was a tribute to the aforementioned bands. In the next years, Kruk followed their own path and managed to forge their own sound. Their proper debut album entitled “Before He’ll Kill You”, released in 2009, was well received both by media and by music fans. The year 2011 marked the release of their second studio album. Doogie White (ex.Rainbow, Yngwie Malmsteen, Tank) made guest appearance on “It Will Not Come Back”. The album was enthusiastically reviewed both in Poland and overseas. Kruk supported such legends of rock as Deep Purple, Uriah Heep, Thin Lizzy, Whitesnake, Graham Bonnet, ex-singer from Rainbow, and Michael Schenker Group. In 2012 Kruk released their latest album “Be3”. Piotr Brzychcy commented on the title of the new album: “’Be3′ is a reflection of what is happening in our music and in ourselves. We are here now, we write music, we play it, we’re releasing another album, we love doing it and, most importantly, we are free to do so. It’s a kind of a manifesto which says – we do not want to change that state.”
In 2014 the band plan to release their new studio album.