Piotr Brzychcy, Kruk’s guitarist, comments: „We have an unwritten rule in Kruk not to return to the ideas from the past. But, from time to time, rules need to be broken… The cover artwork of our new album is one of those ideas which are usually hidden deeply at the bottom of the drawer. We were thinking about using this artwork for our previous album “Be3”. It caught our attention then but, for some reason, it didn’t match the overall concept of the album. This time, it matches our music perfectly. This little boy reminds us of the times when we were little… For a moment, we can forget all the difficulties of everyday life and return to the blissful childhood. The artwork was painted by my wife Ewa and digitally processed by our good friend Marek ‘Ptyś’ Jastrzębski.” 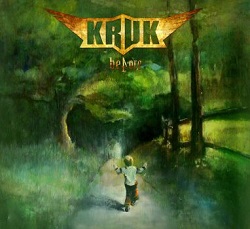 The release date of “Before” is scheduled for June, 9th in Europe and July, 8th in North America (via MVD).