KULT OF TAURUS are proud to announce that they have prepared a very special split assault with their old comrades EREVOS AENAON that will mark their first official presence, jointly titled Born of Fire, Forged By Death. Set for international release on July 14th via FOREVER PLAGUED RECORDS the split CD will have two halves, “Side Fire” and “Side Death.”

“Side Fire” will contain four songs from older KULT OF TAURUS material (demos, splits) that were chosen to represent the band’s past but with all of them re-recorded in 2012, given the proper shape and sound they should have had back then. A rawer and more primitive side of KULT OF TAURUS is now revealed, yet it contains some of the identical riffing that led to their celebrated Divination Labyrinths.

“Side Death” will contain four songs that emanate EREVOS AENAON’s own essence both in music but also in philosophy. EREVOS AENAON might not sound familiar to those outside Greece, but they have been around since 2000, spreading handmade demo recordings as well as some notorious local live performances. Two old tracks and two new ones have been recorded especially for this release featuring KULT OF TAURUS members; fans of older Deathspell Omega or Hirilorn may find some interesting sounds herein.

The cover art was created by hand by EREVOS AENAON vocalist Alastor and the rest of the layout by S.I. Of KULT OF TAURUS, all staying true to the old black metal spirit. 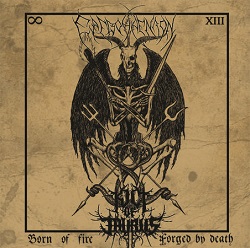 Tracklisting for Born of Fire, Forged by Death split CD

1. Erasithanatos
2. Fang Of The Wolf
3. Gnosis And The Frozen Stream
4. Funeral Boat
5. Blackened Skies
6. Ending The Chapter of Humanity
7. Traitor
8. Reformation Of Evil