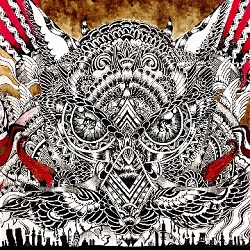 An English translation of the Finnish text is as follows:

1. “Minä elän”
This is where it all began in the Spring of 2010. “Minä elän” is the first song I wrote for Kuolemanlaakso. The song starts out mellow but ominous, and it ends in an ultra-brutal guitar guitar rampage, which was obviously a concious dramaturgic decicion. V. Santura (Triptykon, Dark Fortress, ex- Celtic Frost) – who co-produced, mixed, mastered, and engineered the album – sent me an email while mixing the album saying that the opening riff is the best riff he’s heard in years, and he keeps hearing it in his head everywhere: while cooking, while driving, while doing dishes…everywhere. The vocal timing of the chorus has influences from French hip-hop.

2. “Kuun lapset”
This is sort of my own interpretation of Eino Leino’s poem by the same name. When I was demoing the song, I tried out the vocals with that very poem. Because some of the lyrics fit rhythmically and thematically very well with the music, I decided to leave severel lines of Leino’s original poem in the lyrics. The chorus of this song is probably my favorite from the album. It is dark, rugged, majestetic, and beautiful at the same time. I wrote the outro originally for Chaosweaver, but it fit this song better than anything else. The middle part of the track also features a guest spoken-word performance by my two-year-old son.

3. “Nostos & Algos”
The intro melody is possibly the closest thing this band has or will be to Amorphis. Usva (bass) modified it from the melody of the last chorus. This track is more or less a live-spirited jamming session without showing off technically. The lyrics deal with yearning for the past and the pain of losing the battle against time.

4. “Roihusydän”
“Roihusydän” is based on a shamanic chant, which appeals to the primitive instincts. It is inspired by a Finnish band called Sielun Veljet and “My Wild Love” by The Doors. I heard the witch drum-beat in my head a couple of years ago in an amusement park in Helsinki,Finland. At the same time, I remembered a poem I had written more than a decade ago. I combined those two elements on the spot and hummed a demo of the song on my iPhone right there and then. Later, I recorded the song by myself in my home studio. The track only features vocals, witch drum, and my son’s Moomin maracass. It doesn’t need anything else. It is a spontaneous but functional chant, which ends the A side of the vinyl and prepares for the forthcoming swarm.

5. “Etsin”
This is probably the most Celtic Frost- and Triptykon-influenced track on the album. The intro is super-cool to play live because of its crushing heaviness and the feeling of sheer power. A lot of people that have heard the album have picked “Etsin” as the best track on it, including Santura. The song pretty much recaps what this band is all about: heaviness,despair, juicy melodies, different styles of singing and crushing soundscapes.

6. “Ikiuni”
I worked on the arrangement of “Ikiuni” for a long time. I believe there were about ten versions of it before ending up with the best one. The other tracks are quite airy, but this is tighter than a long-distance runner’s ass. We didn’t use autotune or other gimmicks on the album, but this track needed drum triggers because of its fast tempo on double-bass drum-fire. The lyrics have a lot of inter-textuality in different directions, but they essentially deal with one particular modern-day phenomenon.

7. “Uljas uusi maailma”
“Uljas uusi maailma” went through a facelift in the studio. Santura modified the arrangement with a hefty hand, and made the wholeness more complete. In my opinion, the track has a lot of cool keyboard parts, which spice up the guitar riffs. The all-male chorus features guest shouting by Jules Näveri (Profane Omen, Enemy of the Sun), Ville Sorvali (Moonsorrow), Aki Heikinheimo (Ahma, ex- Misery Inc.), and Sami Helle(Dauntless).

8. “Aurinko”
Before we flew to the studio, Santura said that in his opinion the album needed one more track, because it would have been too short otherwise. He also mentioned that if we can’t come up with a song, we could compose one together. Well, of course, we didn’t complete “Aurinko” after a comment like that, haha… The intro and first two verses and the outro were written at the last or second-to-last rehearsal before flying to Germany. We left the arrangement wide open on purpose. The chorus was written in the studio. The other songs are pretty much written by me, but “Aurinko” was more of a band effort, where Santura’s share was grand. He wrote and played all the leads on it and sowed all the elements together. I’m glad he did, because “Aurinko” is probably my favorite track on the album, and Kotamäki had the opportunity the get all sensitive on the verses, and release the beast on the chorus.