“We are back safe and sound from tour, it was a rocky one but we kept our spirits up. First we would like to thank all the promoters, bands and fans for making this tour possible. We unfortunatly only got to complete 3 of the 8 shows we had booked out west. Our van broke down 3 hours outside of Vancouver, we were super crushed as we were looking forward to hitting vancouver again and the rest of the dates. We got it towed to a nearby town and they helped us get to kamloops where we waited for the van to get fixed up. Other than the blown transmission we had a successful tour, showed fans a little taste of new material and got our new guitarist worked into the tour life. We are already making plans as your reading this to make up for the lost dates so stay tuned. See the tour video below to witness the journey we had!”

Check out the Laikaruptour 2012 video at this location.

Back at home, LAIKA is preparing to hit the studio with engineer Ryan Forsyth to record the long overdue follow up to 2010’s Crafting the Cataclysm. To help fund the album, entitled Somnia, LAIKA has launched an IndieGoGo campaign. Pledge packages for exclusive pre-orders, LAIKA merch and more are available at www.indiegogo.com/somniafunding.

Crafting the Cataclysm is available for free download at this location.

Laika is a six-piece melodic death metal band. They combine the modern metal feeling and progressive tone of new wave North American metal with European influences from hard hitters Dark Tranquility, Amon Amarth and Insomnium. With inspirations originating in both classical music and folk metal; Laika delivers a truly surreal sound experience. As a band Laika is constantly evolving, refusing to become complacent. This thirst for evolution drives the writing process as successive tracks learned from their predecessors, giving the impression that each new song is bound for glory. As the band evolves it also gains new experiences including a healthy dose of touring and big ticket shows. Approaching their third year in live performances Laika has already shared the stage with fellow metallers Abysmal Dawn, All Shall Perish, Conducting from the Grave, Kampfar, Kataklysm, Nylithia, Necronomicon, Obscura, Unleash the Archers, and Vreid among others.

Laika is currently deep in the works of producing their second full length album which is due to be released within the year. A sneak peak of two tracks planned to be release on the second album can be heard on the band’s SoundCloud page. As most of their new and best material is yet unrecorded; the best way to hear it is to go to one of their shows and check it out. 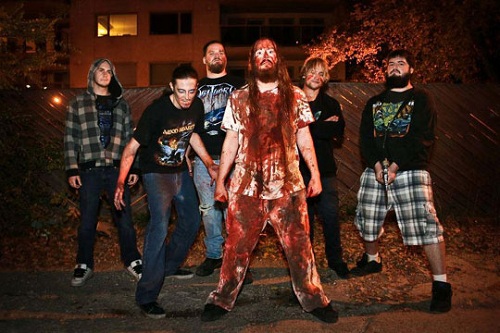