Metal/Southern Rock band Leash Eye is still in the studio working on their new full-length album. “V.I.C.I.” is a follow up to their acclaimed album “„V.I.D.I” from 2011. “Heinrich” (Filip Hałucha) from Sound Division Studio is responsible again for the production of the new material. Part two of the studio report is now available on the band’s official channel on YouTube at THIS location. 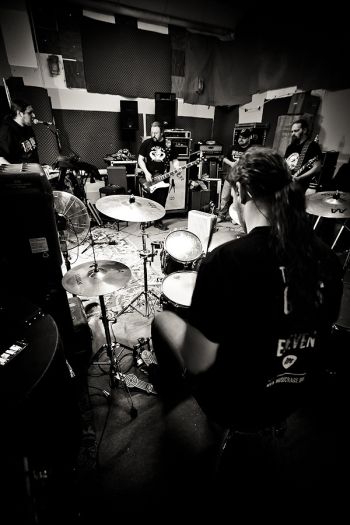 The band was founded by three friends, playing for their own enjoyment. As their musical goal, the band decided to follow the same road as the one chosen by Alice in Chains, Soundgarden, Pearl Jam, Kyuss, Tool, Illusion, and Spiritual Beggars. In March 1999, the band recorded 5 songs, which were featured on their promo CD. The change of the lead singer in 2003 triggered also a change of their style – these days Leash Eye stands for melodious hard rock of the 70’s, accompanied by heavy, modern sounds and classic vocals. In Autumn 2009, Leash Eye’s debut album “V.E.N.I”, featuring guest appearance of Riverside’s Michał Łapaja on the Hammond organ, sees the light of day. The album met with the acclaim of both critics and listeners. The year 2010 is marked by intense work on new songs, which are to be included on the band’s new full-length album. Ultimately, 10 out of 13 compositions are chosen and, in the beginning of 2011, the band enter Sound Division Studio in Warsaw to record their 2nd album “V.I.D.I.”, with Behemoth’s Orion as the producer and Vesania’s Heinrich as sound engineer. Until now, the year 2011 was definitely the most successful year in Leash Eye’s career. They won Antyradio’s competition and, as a result, their right to perform at Sonisphere Festival next to Motorhead and Iron Maiden. Also, they represented Poland at Wacken Open Air festival, where they performed as the winners of Polish edition of Wacken Metal Battle. Also in 2011, they released their second full-length studio album “V.I.D.I.”.

And still the best is yet to come. Their third studio album “V.I.C.I.” is scheduled for release in October. Full details to be confirmed soon.